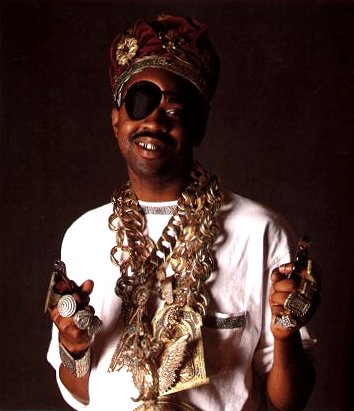 This is a gem from the archives of Lyrical Swords giving you an idea of how the master word crafter Adisa Banjoko puts his pen game down…enjoy!

The Mind of the Ruler: Slick Rick In an old box, I found a bunch of old interviews I conducted. One of the tapes on the top of the pile was the infamous Slick Rick. This was was a very personal interview. Beyond the glitz and glam Slick Rick is a very down to earth cat. Here Slick Rick talks about the loves of his life, the first concert he went to and his passion for black and white film. The tape is undated but it is estimated that this happened in 1999. This interview has never been printed- until now.

AB: What do you consider to be your greatest achievement?

SR: I would say owning two or three family houses.

AB: Who or what is the greatest love of your life?

SR: My children, Ricky and Lateesha.

AB: What is your greatest fear?

SR: I guess …I guess the same fear everybody else got- I don’t wanna go to hell. *laughs*

AB: What do you regard as your lowest depth of misery?

.AB: If you could chose the way you die, how do you wanna go out?

AB: If you found out that reincarnation was real what would you wanna come back as?

SR: Somebody holding a position in politics.

AB: If you could meet 3 people in history…Famous or not famous who would they be.

AB: When was the last time you cried?

AB: It’s been that long?

SR: I mean, I have my heartaches and stuff…but I try not to. I don’t want nobody seeing me and S!@#…

AB: when was the last time you really laughed?

SR: When I saw Austin Powers- that was funny…HE, is funny.

AB: What’s one thing you wish that was true that isn’t?

SR: I wish I could see outta two eyes. But then again- it did help my career a little bit *chuckles*.

AB: If you could only teach your kids ONE THING- what would it be?

SR: I would teach them to believe in Jesus Christ.

AB: Who was your first love and where did you meet?

SR: When I was in England I had a girlfriend named Debbie Twiggs (SP?). I was only a kid. She was my first love. I was only about seven or eight. We went to the same school.

AB: What is your biggest addiction? From cocaine to candy bars- whatever.

AB: With a little bit of runny in the yolk?

SR: Just a little runny in the orange part…And a tad bit crispy.

AB: What were you most afraid of as a child?

AB: What was the first concert you went to…Not the first RAP concert- but concert period.

AB: what was the best concert you ever went to, but were not a part of?

SR: I never really went to any concerts that I wasn’t in.

AB: That’s kinda weird- but I guess it keeps you safe. When did you first find out that cats were trying to boot you out the country?

AB: What’s the status on that?

AB: Do you think they are checking for you BECAUSE your a rapper. Or is that of no consequence?

SR: I think it’s of no consequence. You have to go through certain channels. Just like you put a piece of cheese in a rat cage. You commit a felony, it does not matter who you are- you could be deported.

AB: When will you know?

SR: I guess when I feel those handcuffs *hard laughter*.

AB: Where would you go if you got the boot. Back to England?

SR: I never really thought about it like that. Where ever it was- they’d have to be English speaking.

AB: WHAT?!? The “Ruler” ain’t fluent in other languages?!?!? Tell me about the first day you got outta jail…What did you wanna do?

AB: Really?!?! Is the food in jail really bad, or is it just not that good?

SR: It’s just not that good.

AB: Give me like your average breakfast, lunch, and dinner in the clink.

SR: OK …Breakfast would be cold cereal, coffee and maybe like some bread. Lunch would be like hamburger helper- and that’s a GOOD lunch. Dinner would be the same. Kinda bargain foods. On a GOOD day (which happened once a week) you’d get eggs or BBQ chicken.

AB: I know you have been asked this before but what was the general reaction when people saw you? Where you easily noticed?

SR: Yeah, because of the patch.

AB: So did they try to get with you ’cause you had hella scrill?

SR: Yeah, I had my share of that. But it could have been a lot worse?

AB: Were you sharing a cell or were you solo.

AB: Did you lose a creative part of yourself in prison.

SR: I wouldn’t say that. I’d say it preserved it.

SR: I see a person that’s trying to stay grounded. I think that’s why people like me. I’m not trying to stand out like a super hero.

AB: But do you see yourself as a pioneer?

SR: Well, I never really looked at it like that. I was trying to be like them. But I guess that was so long
ago, nobody wanna look past that. Like “No YOU started this s!@# nigga”. *chuckles*

AB: Do you feel old in the game?

AB: How old are you for the record?

AB: What’s the most shocking thing you’ve seen in the rap world that you thought would have never happened?

SR: The amount of money that rappers get now. When I was growing up if you had a nice house or a car- YOU WAS THE S!@#. Nobody thought about having more money than you could ever spend.

AB: At what point after you came out, did you FEEL like a star?

SR: I started getting asked for autographs.One time me, LL, Cane and De La Soul had a show. We got back to the hotel, and people were rushing us screaming and S!@#- like we were the Beatles. That was a good moment.

AB: What do you think is one of the big assumptions that people make about you that’s not true.

SR: People think that I’m conceited, and I’m not a nice person.

AB: What is your favorite Slick Rick song.

AB: Do you remember where you were when you wrote certain rhymes? Where were you when you wrote that?SR: I used to be a mail clerk. After you did your stuff you had some free time. I think I wrote it on one of those breaks. I was never a rah-rah person. I never sold drugs or did anything crazy. A lot of people in my age group, or the people that was considered cool and dangerous- they were the people that did that. I just wrote it from my point of view. I was into getting a job.AB: What were some of the jobs you had before you made it?SR: I was a mail clerk for Nieman Bro’s. I was a law clerk.AB: How many rap groups were you in before Dougie Fresh?SR: I was in a crew called the Kangol Crew. We weren’t a real crew. We wore blazers and Kangols that matched. Like green, purple, yellow. Little stuff to make ourselves known. Only me and Dana (Dana Dane) tried to do it. I met Dougie at a battle. He liked what he heard and he wanted to do a songs together, like “La Di-Da Di”. So, we would go do songs together on the corner and people would sell it. He figured we should make a record out of it and we put “The Show” on the other side.AB:What do you listen to when you are not listening to Hip Hop?SR: I like old school reggae. Like the Heptones, Dennis Brown…Most folks would not know these people.AB: Who is a person you met through Hip Hop that you never thought you’d meet? SR: I met Malcolm Forbes, before he died- at a party in LA. I met Dennis Hopper at the same party.AB: What kind of movies do you like to watch?SR: I like the Black and White movies on AMC. Those films were more rich. They were trying to draw you into the scene. They wanted to make you believe the scene. Now they want you to be attracted to the actor- like Mel Gibson or Julia Roberts. AB: What did you think of American History X.SR: That was underrated, but it was a GOOD movie.AB: I think it was TOO real. But cats don’t wanna see that. They wanna forget.SR: But that’s what we need- to see the real.We need realism to deal with realism.AB: How come you have never done any flicks?SR: I’m not a good actor.AB: At least you can admit that, rather than force it and then it not work out.SR: I could do it if there was leeway in the script. But if I gotta be like Will Smith and remember them hard ass lines like in “Six Degrees of Separation”- i just can’t see it.