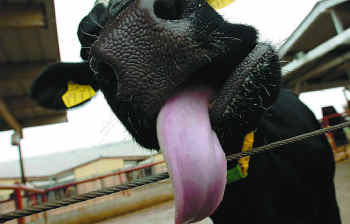 ATTENTION! ATTENTION! To all meat eaters!  Your government has just deemed cloned meat consumable.  The FDA has decided that meat from a cloned animal poses no health risk (as if normal meat doesn’t?) so not only has it approved it for consumption they are also saying there is no need to label the meat as “cloned” meat so beware, there will be no way to distinguish the “real” from the “fake.”  They have also greenlit milk from cloned cows and consumers could be expecting that to be hitting shelves sooner than the meat.  Especially with milk prices skyrocketing and dairy being overall threatened by the increase I’m sure this will spell relief to people who feel they can’t afford the pricey cow fluid.  This entire process was set into motion ten years ago when scientists first successfully cloned Dolly, the sheep.  Studies have been underway by the FDA to see if the meat will meet their approval standards.

“The milk and meat for cattle, swine and goat clones are as safe to eat as the food we eat every day,” said Randall Lutter of the FDA.

For more on this extremely important article, CLICK HERE to read the rest of the article.

Editor’s Note: With obesity at an all time high you would wonder why the FDA wouldn’t object to another source of beef being introduced to the American diet when research should be focused on stemming meat intake.  Plus, the steriods in cows known as bovine growth hormone has every little girl in America growing unproportionately (think Buffy) and no studies are being done to determine the ramifications of that.  So it’s a crime for an entertainer to knowingly take steriods but when the government unknowingly introduces it into your food supply, there is no crime being commited.  Makes you go hmmmm….

One thought on “BEWARE: Cloned Meat Is Coming to A Supermarket Near You!”