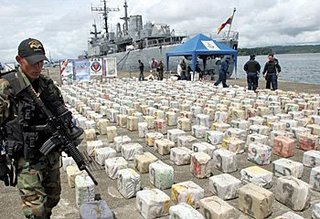 As of lately alot of attention has been paid to the increased production of heroin in Afghanistan (post Taliban), the world’s leading supplier of dope but with these recent busts in South America it is clear that coke output isn’t slowing up anytime soon. Authorities in Peru seized 1.5 tons of cocaine (peruvian raw?) from a small international cartel who were reportedly “armed for war” at the time of their apprehension.

They were in possession of $11,000, jewelry, two motorcycles, two vehicles, telephones, radios and equipment to package the work. No details on the weapons was made available. In the middle of the month (3/15) Venezuelan police discoverd 2.9 metric tons (3.2 tons) of coke in a shed. They were in pursuit of one suspect at presstime.

A few days prior, in Puerto Rico US authorities (US Coast Guard) seized 456 kilos (1,005 lbs) of coke packed in 17 suitcases on a boat off the eastern shore of the island. In the Carribean territories alone, authorities have claimed to have seized upwards to 1,600 kilos (3,527 lbs) of coke estimated at $54.5million since October of 2007. With this amount just getting caught in the strainer imagine how much yayo must be on the streets undetected?

Did you hear about the CIA plane that crashed with 3 tons of coke on it…coming from Colombia?
CLICK HERE for related posts.