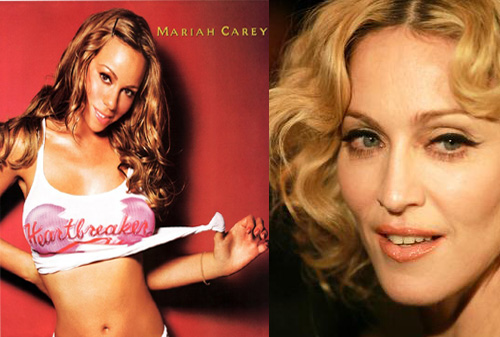 With the music industry sales in a death-fall, the honchos at Def Jam and Warner are actually having a pretty good spring. Can’t miss artists Mariah Carey and Madonna have done serious damage to longstanding Elvis chart records and have their eyes firmly planted on The Beatles next.
Janet who has received a luke-warm response to her latest project is probably kicking herself.

As expected, Mariah Carey moved past Elvis Presley and into sole possession of second place for most No. 1 singles in the rock era, as “Touch My Body” soared 14 places on the Billboard Hot 100 to become the 18th chart-topper of her career.

Presley also was nudged from his standing as the recording artist with the most top-10 hits in the rock era, as Madonna surpassed him with her 37th top 10, “4 Minutes