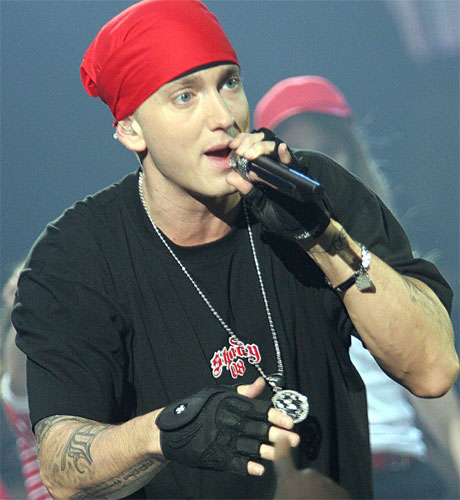 The much anticipated return of Marshall Mathers aka Eminem will occur on June 27th in front of a crowd of 45,000 gathered in London’s Hyde Park to celebrate the birthday of Nelson Mandela. Yup, you read it right Slim Shady has been requested to serenade former South African President Mandela, joining the ranks of Stevie Wonder, Paul McCartney, Spice Girls and U2. The event will be hosted by Will Smith and Jada Pinkett. Mandela’s AIDS charity 46664 will be the recipient of the money raised from this bash which will certainly turn into a blowout event with the inclusion of Em, who has turned into somewhat of a recluse (its even rumored he’s ballooned to over 200 lbs!). He hasn’t graced a stage in over two years or released a studio album since 2006. For those of you wondering how this came about, a publicist involved with the event said this:

“We wanted some of the greatest artists from recent times and Eminem was on the list. I contacted Eminem’s management on the off-chance and never expected him to go for it.”

Apparently Em and his people must’ve seen this as the perfect setting to stage a comeback, especially since his career has been dogged by accusations of him being a closet racist, stemming from those long-lost recordings that were unearthed by Dave Mays and Benzino in which Em was calling black women “bitches.”