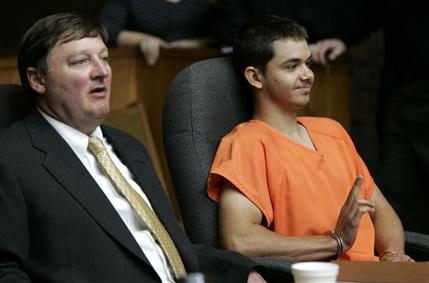 Bravo to the parents of this sick kid for alerting authorities, when they discovered he was planning to blow up his school and possibly take out a bunch of innocent kids and teachers in the process.

Though he is smiling in court due to the fact he is getting the attention he so desperately wanted, it comes at a price of a bunch of psychiatric care and possible life sentence. More of this below:

An 18-year-old straight-A student accused of planning to bomb his high school was charged Tuesday with attempting to use a weapon of mass destruction, which carries a possible life sentence.

The charge is one of three federal counts Ryan Schallenberger faces in what authorities say was a scheme to detonate explosives in a suicide attack on his high school in the small town of Chesterfield.

Schallenberger also faces charges in state court, where he appeared for a hearing Tuesday. Cuffed and shackled, the teenager smiled and gave a quick wave to courtroom spectators, including his parents and some classmates.

After the hearing, Chesterfield County prosecutor Jay Hodge said investigators found a timeline for an attack in Schallenberger’s journal. The entry, made last month, included how he would lock his school’s doors and where he would place more than five explosives in the building, Hodge said.

Hodge said the 50-page journal also contained some attempts at self-analysis and that the teenager knew that what he was planning was wrong.

“The kid needs help, but this is a violent offense,” Hodge said. “You can’t put an entire community in fear and just walk away. In this situation, society requires jail time. There’s no way to excuse or forgive what he did.”