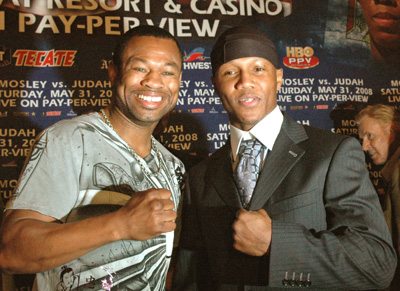 Reports ar urfacing that Zab Judah will not kickstart his comeback by facing Sugar Shane Moley. He apparently has injured his arm and is unable to continue the fight on the scheduled date. Yeah right..

Read the spin below:

Judah (36-5, 25 KOs), the former undisputed welterweight champion hoping for a career comeback, severely cut his right forearm and needed 50 stitches to close the wounds, which will keep him out of training for four weeks.

“It is very unfortunate that Zab suffered this injury and that this great event had to be cancelled,” Golden Boy Promotions CEO Richard Schaefer said. “We are already in discussions with all parties involved to attempt to reschedule the fight for the near future.”

Mosley (44-5, 37 KOs), the respected former three-division champion, lost a competitive unanimous decision to Miguel Cotto in his last fight Nov. 10. When he couldn’t nail down a rematch with WBA champion Cotto, Mosley settled for Judah in a non-title bout at the Mandalay Bay Event Center in Las Vegas.

Judah had been animated in the public build-up to the fight, offering to bet Mosley US$100,000 on the fight’s outcome and later pushing out a wheelchair for the 36-year-old star at the Bernard Hopkins-Joe Calzaghe weigh-in last month. Judah also called for pre-fight blood testing for Mosley, who admitted taking steroids before a 2003 bout but claimed it was inadvertent.

Judah hasn’t fought in Nevada since April 2006, when his series of low blows in a unanimous-decision loss to Floyd Mayweather Jr. caused a melee in the ring involving both fighters’ trainers and entourages. Judah was fined $250,000, while Yoel Judah, his father and trainer who traded punches with Mayweather’s uncle and trainer, Roger, was fined $100,000.