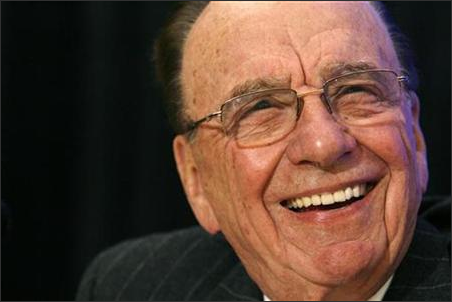 Who wants to be associated with losers? Bill O Reilly’s boss Rupert Murdoch is feeling the Obama wave and even is taking credit for his dead in the water newspaper The Post for endorsing him over Hillary(don’t worry he owns everything at is worth 8.8 Billion). Check his thoughts on the upcoming presidential campaign:

“You have got the Obama phenomenon. You have got, undoubtedly, a recession … The average American is really getting hurt financially and that all bodes well for him (Obama), Murdoch said.

“I think it (a recession) is one we will be coming out of for quite some time,” Murdoch said. “In the next 18 months, this country is going to be in for a very hard time.”

“You have probably the making of a complete phenomenon in this country,” Murdoch said in describing what he predicted will be a sweeping victory for Democrats in November.

Murdoch has yet to endorse a U.S. presidential candidate but considers Barack Obama very promising, the media magnate said in an interview by two Wall Street Journal reporters at an annual conference for high-tech industry insiders.

News Corp recently acquired ownership of the Journal and its parent company .

3 thoughts on “Rupert Murdoch:”I want to meet Obama. I want to know if he’s going to walk the walk.””