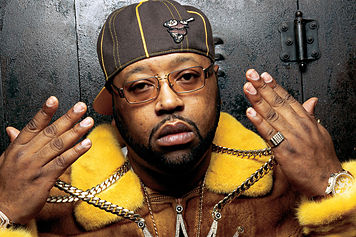 DJ Kay Slay, when he’s not smacking your favorite DJ, he’s busy addressing what he feels is a rise in attacks on the validity of the DJ. The victim of his vitriol this round is Jermaine Dupri who made headlines last week when he posted a clip online proclaiming that the DJ IS DEAD! Maybe this wasn’t the best time to express those sentiments, being that his words may have gotten caught up in the crossfire between DJ’s far-and-wide defending their honor against comments made by Lil Wayne, inviting DJ’s to his nether regions. Well, Slay took the opportunity to take Dupri to school and proclaim that the executive is the one on life support. He noted that Janet’s various flops have JD’s fingerprints on them. Who’s to blame? The DJ?? He also noted some suspicious activities taking place in the board rooms as reasons why executive’s were slipping and losing grip on their corporate responsibilities. Its always hilarious to hear Slay unleash a can of whoop-ass on anyone so peep this: