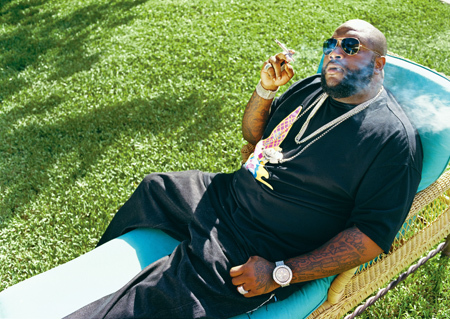 The Boss remains stubbornly defiant STILL in the face of mountains of evidence mounting against him, discrediting his claims of living the “life” in the streets of M.I.Yayo at least during the mid 90’s when records show he was a Miami Dade C.O. These denials are gonna be the straw that broke the camels back.

Hip-Hop star Rick Ross has hit back at recent reports surrounding his previous employment with the Florida Department of Corrections.

During an interview on Friday (July 25), Ross addressed the latest developments as “rumors” and maintained that he is a victim of a massive smear campaign.

Speaking to Phoenix, Arizona Hip-Hop station Power 98.3 (KKFR-FM), he responded to the question of his past employment by simply saying “Don’t believe the hype.”

“In the game we in, it’s real competitive,” Ross told Power 98.3 FM. “Competitors have to do what they have to do to eat. We making the best music. Y’all seen the BET Awards, y’all saw the magazine. We the biggest in the game, we the best in the game. Just keeping it real. And anytime somebody can attack my character, like I said, you get nothing from the Boss. I don’t give haters the pleasure.“

In video footage of the interview, which took place during a fan meet-and-greet at the Virgin MegaStore at the Arizona Mills Mall, Ross is seen dancing and interacting with fans, apparently undaunted by the continuing appearance of “evidence” of his two-year stint as a Correctional Officer at the South Florida Reception Center in Miami-Dade County.

Ross said he views the discussions the documents have created among his fans, foes and colleagues alike as part of in the rap game.

“When you get to my level, you’re a great conversation piece,” Rick Ross calmly explained. “I’m big on the blogs, I’m big on the magazines, and I appreciate that as an artist. That’s why I’m in the game. I got in this game to introduce people and to make great music. And that’s what it’s about.

Ross also revealed that he and Foxy Brown were no longer an item.