If this chick is guilty of these charges she really needs to hang. She took advantage of minors and probably gave them mental scars that will effect them for life. That school will never shake the memory of her abusive acts. Guilty till proven Innocent… 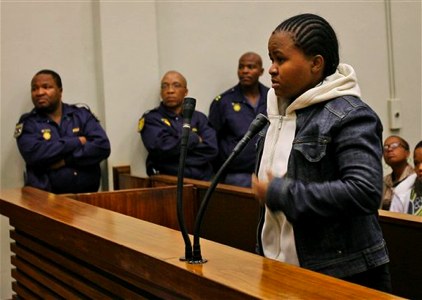 SEBOKENG, South Africa (AP) – A former dormitory matron at Oprah Winfrey’s school for poor South African girls pleaded innocent Tuesday to charges that she indecently assaulted and otherwise abused six teenagers and a fellow matron at the academy.
Tiny Virginia Makopo, 28, looked nervous and sullen at the start of her trial, and she and her lawyer gave no indication what her defense would be.

Judge Thelma Simpson granted a prosecution request for the rest of the proceedings, expected to last all week, to be closed to the public. She also is allowing the teenagers to testify through close-circuit TV to save them the trauma of confronting their alleged attacker in court.

Police said the alleged abuse took place over four months at her Leadership Academy for Girls and victimized six students ages 13 to 15 and a 23-year-old dormitory matron.

The father of the first child to complain of abuse withdrew her from the school after her complaints were ignored.

Winfrey said school officials tried to hide the facts from her. She said she would not be renewing the contract of the suspended headmistress, who denies she knew about the abuse, and indicated other staff also would be dismissed.