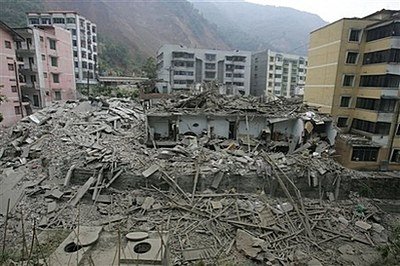 I can’t help but notice that the day after they turned the particle accelerator on at CERN that simultaneous catastrophe’s strike across the world. These mad scientists won’t be happy til’ they ruin the world.

(CNN) — A magnitude 6.9 earthquake rattled Japan on Thursday, within minutes of a magnitude 6.6 earthquake in Indonesia, the U.S. Geological Survey said. There were no immediate reports of damage or injuries from either quake, but both prompted tsunami warnings, although Japan’s Meteorological Agency predicted it would be small, about 50 centimeter (20 inches). The Indonesian quake occurred at exactly 9 a.m. (0000 GMT), the USGS said. Its epicenter was offshore, about 75 miles (120 km) north of Ternate in the province of Moluccas in eastern Indonesia. The quake was strongly felt in Ternate. The Indonesian Meteorological and Geophysical Department issued a tsunami warning shortly afterward — standard procedure for a quake of magnitude 6.6 or higher with an epicenter offshore. The Japanese quake occurred at 9:21 a.m. (0021 GMT). The USGS initially classified its magnitude as a 7.2, but later reduced it. The quake’s epicenter was offshore, about 80 miles (125 km) south-southwest of Kushiro on the northern Japanese island of Hokkaido, and about 21.7 miles (35 km) below the Earth’s surface.

The Indonesian quake was much deeper — about 57.9 miles (93 km). In general, earthquakes centered closer to the Earth’s surface produce stronger shaking and can cause more damage than those further underground. Earthquakes between magnitude 6.0 and 6.9 are considered “strong” by the USGS. The National Oceanic and Atmospheric Administration said neither quake posed a Pacific-wide tsunami threat. However, “earthquakes of this size sometimes generate local tsunamis that can be destructive along coasts located within a hundred kilometers of the earthquake epicenter,” the administration said.

One thought on “Simultaneous Earthquakes Hit Japan and Indonesia”