If these ads don’t move you to stop smoking cigarettes then I don’t know what to tell you. My mother died from acute emphysema and she had stop smoking for twenty years. So if you keep smoking I have absolutely no remorse for you.

Smokers buying cigarettes will from Wednesday be confronted with a series of gruesome images printed on the packets showing how tobacco damages health.The pictures, which show cancerous lungs and throats as well as rotting teeth, replace written warnings such as “Smoking clogs the arteries and causes heart attacks and strokes” or “Smoking can cause a slow and painful death” which currently greet going to light up.

The picture warnings will start appearing on cigarette packs from October 1 and will be compulsory from October next year. They will be printed on all tobacco products from October 2010. 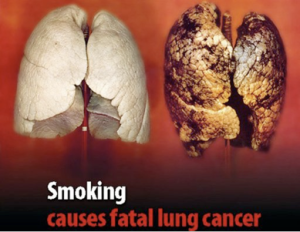 One in six people in Britain smoke out of population of more than 60 million and the government has been stepping up measures to reduce that figure.

Written warnings on packs were adopted in 2003, and last year, the minimum age for buying tobacco was raised from 16 to 18.

Smoking in enclosed public places was banned across the country from July 2007.

“I hope they will make many more (people) think hard about giving up and get the help they need to stop smoking for good.”