Once again we send our regards to the Hudson and King family. 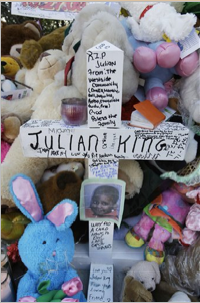 CHICAGO (AP) – Busted for what police said was a rock of cocaine on the driver’s seat of his car, William Balfour could have been spending the past few months behind bars for a parole violation.The 27-year-old felon was instead allowed to remain free and is now considered a suspect in the deaths of Oscar-winner Jennifer Hudson’s mother, brother and 7-year-old nephew.

On the day the victims were fatally shot and the young boy went missing, Balfour told his parole agent he had missed a meeting because he was baby-sitting, records show.

By midnight, investigators involved in a frantic search for 7-year-old Julian King had contacted parole officials and requested emergency addresses, visitor lists, telephone numbers and “anything further” connected to Balfour, according to documents obtained Tuesday by The Associated Press.

No one has been charged in the killings. An Amber Alert issued on Friday named Balfour as a suspect in the deaths of Hudson’s mother, 57-year-old Darnell Donerson, and brother, 29-year-old Jason Hudson. Julian, Balfour’s stepson, was found Monday shot to death in the back of an SUV on Chicago’s West Side.

The Illinois Department of Corrections issued a warrant for Balfour on Saturday for violating terms of his parole by possessing a weapon and failing to attend anger management counseling and a substance abuse program, according to his parole report.

Now that Balfour is in custody, detectives have time to dig deeper into his life, including his relationship with his ex-wife, Jennifer Hudson’s sister Julia, and his exact whereabouts during the weekend.

Balfour was paroled after serving seven years for a 1999 attempted murder and vehicular hijacking conviction.

On June 19, police pulled over Balfour’s car after hearing gunshots in the area, according to the officers’ report. They found a rock of cocaine in plain view on the driver’s seat, the report stated. It had a street value of about $100.

A parole supervisor declined to issue a warrant to revoke Balfour’s parole after the arrest, records show.

“Per supervisor … no warrant,” the report reads. “Agent to monitor offender, impose sanctions.”

Corrections Department spokesman Derek Schnapp said officials who reviewed the cocaine-possession case against Balfour determined “the evidence that was presented during that time wouldn’t have necessarily warranted a violation.”

A judge dismissed the charge for lack of probable cause in July, though no reason was cited in court records.

“Even though the criminal case is dismissed does not mean that you necessarily get a pass on a parole violation because the standard of proof is much less,” he said.

In Balfour’s case, a parole violation could have sent him back to prison for as long as the remainder of his parole—until May 2009—minus a day off for each day of good behavior. That would have meant a release date in mid-December at the earliest.

Balfour’s parole history also shows that a woman at Balfour’s home refused to open the door during an agent’s visit on Aug. 27. The woman told the agent during the 8:30 a.m. visit that Balfour was at work but Balfour’s boss told the agent he wasn’t due until noon.

“Agent heard other people inside the host site and suspected maybe suspicious activities going on,” the report said. “Agent will be following up for a possible warrant on parolee.”

Parolees must agree to allow agents to visit their homes and consent to searches. There’s no warrant mentioned in following days on the report, which does note, however, that Balfour passed a drug test.

Jennifer Hudson, who won a best-supporting-actress Oscar last year for “Dreamgirls,” has thanked fans for their support on her MySpace page but has been in seclusion in Chicago.

2 thoughts on “Hudson suspect could have had parole revoked”