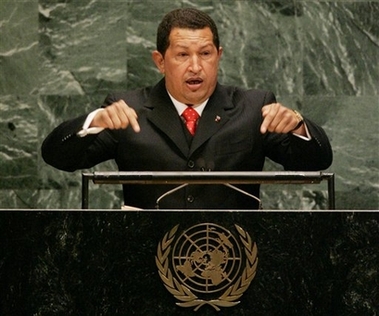 CARACAS, Nov 2 (Reuters) – Anti-U.S. Venezuelan President Hugo Chavez predicted on Sunday the “black man” will win the U.S. presidential race and offered to hold talks with him to improve ties between the superpower and one its biggest oil suppliers.

Barack Obama, the Democratic nominee who would be the first black U.S. president if he wins Tuesday’s election, said this year he would be open to dialogue with leaders like Chavez — a remark that was seized on by Republicans as naive.

McCain, who trails Obama in polls, has labeled Chavez a dictator.

Chavez, a socialist who has mocked President George W. Bush and calls ex-Cuban leader Fidel Castro his mentor, has said there is an inevitable clash between U.S. and Venezuelan interests, although he has at times offered to ease bilateral tensions.

“We are not asking him to be a revolutionary, to be a socialist — no,” Chavez said at a political rally. We just want the black man who is about to be the U.S. president to have enough stature for the times the world is living through.

“I send an overture to the black man, from us here, who are of Indigenous, black, Caribbean, South American race,” he said.

“I am ready to sit down and talk … I hope we can, and I hope we can enter a new stage,” he said later at another rally.

Most Latin Americans would prefer Obama to win the White House over Republican rival John McCain, according to polls. They have felt largely neglected by the Bush administration as the region swung to the left.

Chavez, who expelled the U.S. ambassador in September, urged Obama to end the Cuban embargo, withdraw troops from Iraq and stop what he called U.S. threats against Iran and Venezuela.