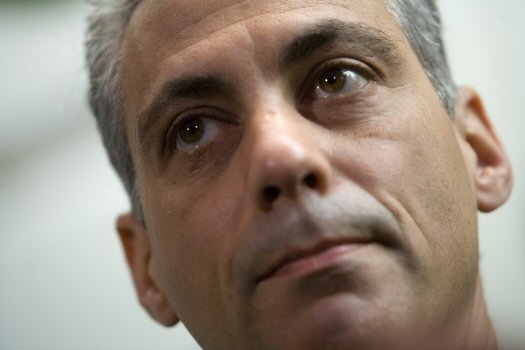 Barack gotta watch who he brings in the Big House with him. This the same cat responsible for Lewinsky’s hotass being around Bill, now his Mossad daddy’s talking greasy before his son is even swore even. I’m sure the Zionist are salivating at the options that have suddenly opened up.

Rahm Emanuel is his own man, with an identity distinct from his father’s. He is not responsible for the actions or opinions of Benjamin Emanuel, a Chicago pediatrician who worked in the 1940s with Irgun, the militant Zionist group that committed acts against Palestinian and British targets that have been widely categorized as terrorism. (In 1938, according to the scholar Avi Shlaim, members of the group attempted to ambush an Arab bus, an attack that failed when a grenade did not detonate. In 1946, members of the group bombed the King David Hotel in Jerusalem, killing 91 people.)

But that does not mean that Rahm Emanuel, or Barack Obama for that matter, can easily ignore the fact that Benjamin Emanuel recently said a nasty thing about Arabs in the Israeli press. This is from the Jerusalem Post’s account of an interview Benjamin gave after news of his son’s appointment to the Obama administration was announced:

In an interview with Ma’ariv, Emanuel’s father, Dr. Benjamin Emanuel, said he was convinced that his son’s appointment would be good for Israel. “Obviously he will influence the president to be pro-Israel,” he was quoted as saying. “Why wouldn’t he be? What is he, an Arab? He’s not going to clean the floors of the White House.”

In a letter sent Tuesday to Rahm Emanuel, the American-Arab Anti-Discrimination Committee asked the congressman to “disavow and repudiate these remarks publicly.” Over the weekend, I asked Rep. Emanuel’s congressional office if they had any response to Benjamin Emanuel’s comments. An aide sent me this statement:

It is unlikely to be the last word on this subject.

UPDATE: Statement from Rep. Rahm Emanuel’s office (released Thursday afternoon): “Today, Rep. Emanuel called Mary Rose Oakar, President of the American-Arab Anti-Discrimination Committee, apologized on behalf of his family and offered to meet with representatives of the Arab-American community at an appropriate time in the future.”