I smell a BLOCKBUSTER!

FUNNYMAN EDDIE MURPHY will play The Riddler in the next Batman movie, The Sun can reveal.
The Beverly Hills Cop star, 47, has been signed up by British director CHRISTOPHER NOLAN to reprise the role played by JIM CARREY in 1995’s Batman Forever. 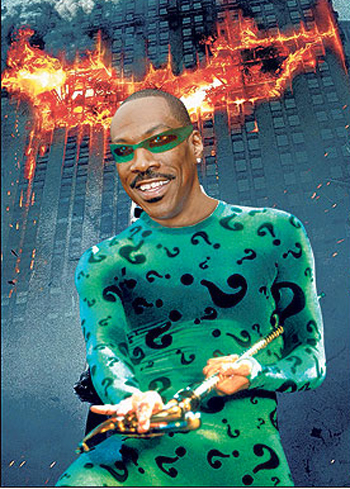 The surprise move follows speculation linking Pirates of the Caribbean star JOHNNY DEPP to the part.

The film, set for a 2010 release, is being developed under the working title Gotham.

Meanwhile, Brit RACHEL WEISZ is said to be up for the Catwoman role.

Insiders also revealed to The Sun the flick will end on a cliffhanger over whether Batman survives a blast at Wayne Towers.

Nolan had been tight-lipped about the future of the Batman films after being rocked by the January death of HEATH LEDGER – tipped to receive a posthumous Oscar for his role as The Joker in Batman Returns.

A film insider said: “Chris wasn’t sure if he wanted to do another movie but as soon as he decided to, he got the wheels in motion.

“Eddie’s a fantastic addition. Everyone’s excited to see what he does as the Riddler.”