(CNN) — NASA’s Mars rovers are celebrating their fifth birthday on the Red Planet, exceeding their original life span by four years and nine months, with no end in sight to their history-making work. 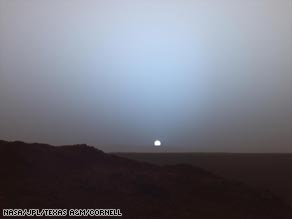 NASA said the rovers had made important discoveries about the wet and violent conditions on ancient Mars.

“We realize that a major rover component on either vehicle could fail at any time and end a mission with no advance notice, but on the other hand, we could accomplish the equivalent duration of four more prime missions on each rover in the year ahead.”

Martian winds had helped clean dust from the rovers.

However, NASA said that Spirit had not had a good clean for more than 18 months and that its dust-coated solar panels barely provided enough power to get it through its third winter, which ended in December.

“This last winter was a squeaker for Spirit,” Callas said.

But with spring and summer bringing more power, NASA planned to move Spirit to two new sites: a mound and a house-sized pit called Goddard.

“Goddard doesn’t look like an impact crater,” said Steve Squyres of Cornell University, a principal investigator on the rover project.

“We suspect it might be a volcanic explosion crater, and that’s something we haven’t seen before.”

Opportunity, meanwhile, is to be moved to Endeavour Crater.

At approximately 22 kilometers (14 miles) in diameter it is more than 20 times larger than another impact crater, Victoria, where the rover spent most of the past two years, NASA said.

Endeavour is about 12 kilometers (7 miles) from Victoria, but Opportunity will take a longer route to avoid major obstacles. It has already covered about 2 kilometers of the journey.

“We keep setting the bar higher for what these rovers can do,” said Frank Hartman, a JPL rover driver. “Once, it seemed like a crazy idea to go to Endeavour, but now we’re doing it.”

Squyres said the journeys had been motivated by science but had led to something else important.

“This has turned into humanity’s first overland expedition on another planet. When people look back on this period of Mars exploration decades from now, Spirit and Opportunity may be considered most significant not for the science they accomplished but for the first time we truly went exploring across the surface of Mars.”