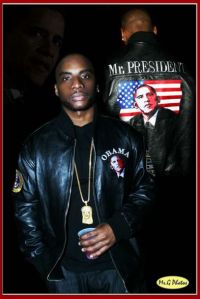 I’m not saying that in 2009 everyone is going to convert to Islam and change their name but what I am saying is that nine symbolizes the highest level of change. Change is the basis of growth. Growth is the basis of life and if you are not constantly growing then you are dying. I say that all the time because I want people to really grasp that concept of thinking. The energy of change is all around us right now. Do you think it’s a coincidence that Barack Obama’s whole campaign was based on change? Is it just random he is called the “Agent of Change”? Hell no that’s divine. God designed it that way. His administration starts this year and if you voted for him you are part of his government. I voted for the first time ever last year. That alone is the direct reflection of the growth that change delivers but it doesn’t stop there.

We have to continue the growth process. The way we do that is by educating ourselves. We have to be the bright, articulate, scholars gangstas and gentlemen that we where born to be. Education is sexy! Being smart is the shit! I know that last line wasn’t the most eloquent way of putting it but I made my point to the people I was trying to reach. That is the beauty of hip hop and it’s the exact reason that hip hop has been the most influential voice among the youth for the past three decades. It speaks right to us, in our language in our voice.

The problem with hip hop today is most artists are not in tune with what is really going on out here in these streets. Some of them are too busy playing stupid to realize things are changing. People are growing and not trying to hear that murder, murder, gangbanging, drug selling, drug using, I will shoot everybody on your block twice, money is all I glorify bullshit they been kicking anymore. People are trying to be educated and informed not misguided and misled. Salute to all the rappers that encouraged the youth to vote last year. That sounded real cute at all the award shows, on 106 & Park and in your interviews in XXL and Ozone but how many of you artists have really taken the time to educate yourselves on government? Obama is the president elect but the problems in our society didn’t magically disappear when he won. We have to continue to encourage the youth to educate themselves on what’s going on in these streets as well as government before they get discouraged.

They’re going to start to wonder why Obama is in the white house but people still keep getting killed in our communities. Obama is in the White House but mama still complaining about money because of this thing called the recession. Educate the babies people add gas to the spark that has been lit in these young peoples minds. My TV stays on news and sports channels. These television executives wonder why shows like Real Chance of Love are suffering in ratings? You know why, because that demographic you thought was in to this mindless nonsense is in to Obama now. They are trying to figure out ways to work for their community not work for Diddy. 50 Cent’s show Money and the Power got cancelled by MTV. Why? Declining viewership among 12-34 year olds. MTV wants to revamp their image. Brian Graden, President of Entertainment at MTV Network’s music channels and President of logo says, “Our shows are going to focus less on loud and silly hooks and more on young people proving themselves.” These are themes that are consistent with the Obama generation. Wow even MTV realizes change has come, even MTV realizes intelligence is the new gangsta.

Rappers, Radio Personalities, bloggers and anyone with a voice, we don’t have to dumb down for our audiences. People want to be educated! Intelligence is the new gangsta. Dave Chappelle and the Boondocks are perfect examples of how you can educate and entertain. Killer Mike and Ice Cube are perfect examples of real gangsta rap. Why? Cause saying fuck another rapper is easy but saying fuck George Bush takes balls. There is nothing wrong with worldstarhiphop and mediatakeout.com but your mental diet cannot just consist of the bullshit content that’s on those sites. Sure its entertaining to watch Max B clown Jim Jones for the 1000th time, and I love to see Tony Yayo talk shit about everybody but I love being enlightened more. Go to Finalcall.com and read Minister Farrakhan’s True Role of Government. In it he says education is not a privilege, education is a human right. It is knowledge that separates the human from the beast, therefore, the best possible education should be given by government and guaranteed by government. Otherwise the government is not guaranteeing the unalienable right of life, liberty, and the pursuit of happiness. I say not only demand it from our government but demand it from ourselves. If you are not in school or college go to the library! Self education is like masturbation! I don’t need to pay anybody to fuck me! The library got all the knowledge I need for free. Better yet I can google what it is I’m trying to learn about. Intelligence is the new gangsta.

Remember that old cartoon that showed the brother with the gun and his pants hanging off his ass and the bandana around his mouth and everybody was laughing at him? Doesn’t that remind you of your favorite rapper? Well in the same cartoon it showed a brother in a graduation cap and gown with a degree in his hand and everybody was running and screaming scared to death. You know why because intelligence has always been gangsta! My little cousin is in 9th grade he’s all caught up in SWAG. He says, “I got SWAG.” “Check out my SWAG.” I tried to explain to him that SWAG is corny and it is just away for a man to call another man sexy, but then I realized I have to speak to him in his language. That is when I let him know that SWAG means to Study, Work, and Graduate. Study hard and get that education that is your human right because you are a citizen of the US. Work hard, get a job, or a internship while you’re in school; get your hands dirty now so you can keep them clean later by being the boss. And for Christ sake please graduate!!! Take that jewel with you all through high school and college little homie. For those not in school SWAG means to Study, Work, and Grow! Study learn everything you can about God, government, life and business. Work hard at making your community a better place to live, work hard at raising your seeds the right way and getting your family straight, and don’t be afraid to grow and become the kings and queens that we are destined to be. That is S.W.A.G!! Not skinny jeans, colorful sneakers, lip piercings and all that other bullshit Lil Wayne got going on.

Intelligence is the old Gangsta, Smart is the Old Sexy and 2009 is the rebirth of the thinker, don’t be afraid to express your unique brilliance, and God given genius. This is the era that Knowledge will reign supreme over nearly everyone. Happy New Year, America.