Officers Michael McKie, Khalid Nelson and Denise Albright called their fight club “The Program,” and the teens they recruited as enforcers were “The Team,” officials said. 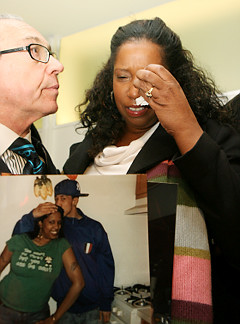 Those who didn’t cooperate were beaten – and McKie and Nelson set the time, place and punishment, prosecutors said.

“They didn’t turn a blind eye to violence. They authorized and directed it,” Assistant District Attorney James Goward said at the trio’s arraignment.

In one case, Nelson had one group of prisoners show another the right way to deliver a beating so the injuries wouldn’t be so noticeable, prosecutors said.

Bronx District Attorney Robert Johnson said the motive was laziness: “It made their job easier.”

The abuse at Rikers’ Robert N. Devoren Center came to light after the Oct. 18 death of inmate Christopher Robinson – who refused to take part in “The Program.”

The officers aren’t accused of ordering Robinson’s beating. Instead, McKie and Nelson are charged with enterprise corruption. Albright, a lesser player, is charged with conspiracy and assault. All three pleaded not guilty in Bronx Supreme Court.

McKie and Albright’s lawyer, Joe Jackson, called the 58-count indictment a “web of lies” spun by criminals. McKie’s mother, Carolyn, said the charges were “nothing but wickedness and lies.” Nelson’s lawyer, Renee Hill, said he “vehemently denies these charges.”

McKie and Nelson were held in lieu of $200,000 bail, while the judge set Albright’s bail at $50,000 – which the correction officers union said was “appalling.” All three officers were being held in the Westchester County Jail.

A dozen inmates also were charged, including three accused of manslaughter in Robinson’s death: Anquant Bryant, 18, of the Bronx; Joseph Hutchinson, 18, of Manhattan, and Shaddon Beswick, 18, of the Bronx.

“If the behavior alleged today is proven, these officers have stained … the good name of the 9,000-plus men and women who work in our jails every day,” Horn said.

Horn said the suspects weren’t caught sooner because they went to great lengths to conceal “The Program,” including lying in reports and signals to alert one another and inmates to supervisors.

Officials said there was no link between McKie and Lloyd Nicholson, a correction officer arrested in February for a similar scheme, also dubbed “The Program.”

Outside court, Robinson’s mother, Charnel, cried as she applauded the arrests.

“I feel like I’m one step closer to getting justice today,” she said, flanked by her lawyer, Sanford Rubenstein, who has sued the city.