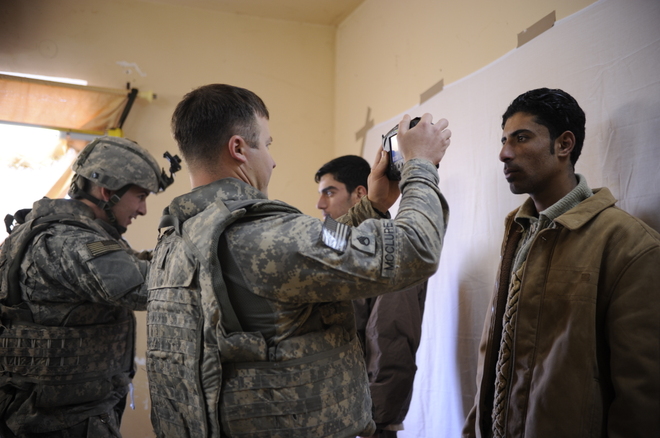 Air Force Gen. Victor Renuart, the Pentagon’s homeland security commander, thinks one of the tools the military uses to combat insurgents in Iraq — the collection of biometric data — is needed here at home.

The Associated Press has this intriguing quote from Renuart, who spoke Tuesday at a defense industry conference in northern Virginia:

“Interestingly, we are probably further forward in using biometrics outside our country in some of the combat environments than we are inside our country,” said the general. “We’ve got to find a way to fix that.”

Tuesday’s conference was devoted to discussion of implementation of HSPD-24, a homeland security directive signed by President George W. Bush in 2008. The directive is supposed to harmonize the way federal agencies and the military collect, store, analyze — and share — biometric data. As it stands, the directive instructs the Attorney General to work with the Secretaries of State, Defense, and Homeland Security and the Director of National Intelligence and the Director of the Office of Science and Technology to create an action plan for implementing HSPD-24 by this June.

The new administration may be reviewing a number of Bush directives, but now might be a really good time to read up on the military’s use of biometric technology. Noah reported extensively on the use of biometrics to deny freedom of movement to insurgents in Anbar province; he also noted the privacy and human-rights implications. For good measure, go read this fascinating transcript of this bloggers’ roundtable from 2007 with Lt. Col. John Velliquette, then the chief of biometrics collection in Iraq.

In the conference Tuesday, Renuart seemed to be talking largely about security badges for military bases. But as anyone who’s been on the receiving end of the U.S. military’s biometric identification process knows, it’s an intrusive process. More importantly, deciding who has access to the databases — and how that info will be shared — will continue to be a major concern for the government and for privacy advocates.