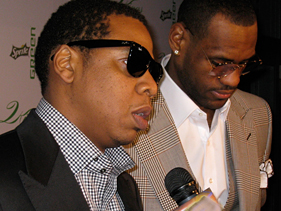 Jay-Z spoke out this weekend about the alleged altercation between Chris Brown and Rihanna.

“It’s not a sound bite, this is a real situation,” Jay told reporters in Arizona. “If you can’t have compassion for others … just imagine it being your sister or your mom or someone like that, then think about how you should talk about that.

“I just think we all should just support her,” he continued. “She’s going through a tough time. You gotta realize she’s a young girl, as well. She’s very young.”

The rapper was formerly president and CEO of Island Def Jam Records, Rihanna’s label, and presided over her signing and early career. Rihanna, Young Jeezy, Ne-Yo and Rick Ross were among the artists who thrived during Jay’s stint as an executive at the label, which ended late in 2007.

Jay was in Arizona for his third annual “Two Kings” dinner, which he co-hosts with LeBron James, as part of the NBA All-Star Weekend. The event was attended by Kobe Bryant, Young Jeezy, Chris Tucker, Spike Lee, Michael Strahan, Grant Hill, Tamia and others.

One thought on “Jay-Z Says, ‘We All Should Support Rihanna’”