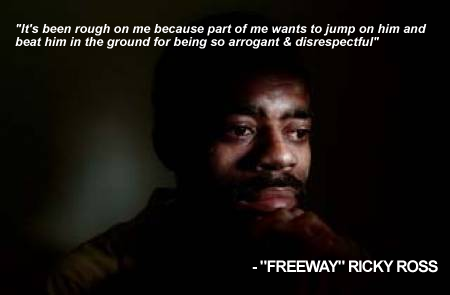 Former cocaine kingpin “Freeway” Rick Ross is in danger of being sent back to prison despite a judge ruling to release him.

Ross has been in prison for the last 14 years, serving an original 20 year sentence for attempting to purchase 100 kilograms of cocaine from a federal agent in 1996.

Due to a successful appeal and model behavior, the courts ruled that Ross was eligible to be released this month to a halfway house, and begin the transition back into society.

However, Texarkana Federal prison officials have stated Ross’ paperwork has been “lost,” and the correctional facility will not honor the judge’s ruling.

Wendy Day, celebrated Hip-Hop advocate and founder of the Rap Coalition, explained that the prison’s actions are a concerted effort to keep Ross from moving on with his life.

“We need help and support in contacting everyone and anyone of power who works for the BOP (Bureau of Prisons) to get this situation resolved,” Day disclosed in a statement. “Rick should have been out over a year ago, and this newest so-called ‘glitch’ is the 5th time that the warden and the BOP have directly gone against the Judge. How can they get away with this? I don’t know – but they are.”In the early and mid 1980s, Rick Ross controlled the majority of the drug trade in Los Angeles, reportedly grossing $2-3 million dollars per week.

His arrest and conviction at the behest of his dealer, Oscar Danilo Blandon, revealed his organization had ties to the infamous Iran-Contra scandal.

Since his imprisonment, Ross has expressed regret for his actions, and plans to begin extensive community outreach to youth on the dangers of drugs.

Additionally, he has shunned the glorification rappers have bestowed on his former life.

“After seeing all the stuff that has been going on with the Correctional Officer (William Roberts) that stole my name, makes me think back to a year and a half ago when we spoke,” Ross told AllHipHop.com last July. “I tried to talk to him like a big brother and let him know to be you, and that he couldn’t be me. And that if he wanted to rap the lifestyle that he couldn’t frame it based on my life.”

Before his latest legal issue, Ross was scheduled to be released on March 29.