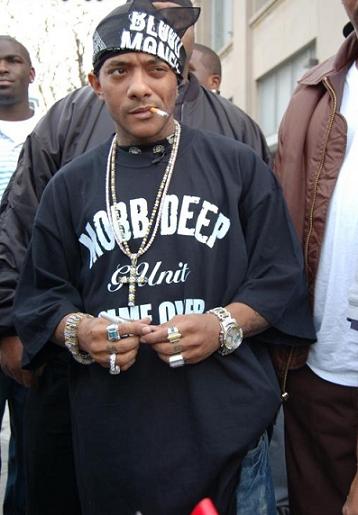 Incarcerated rapper Prodigy has reportedly sued a record company for breach of contract for $30,000, which P says is at the heart of his family’s financial woes.

Prodigy holds the company responsible for plunging his family into foreclosure. He says the Vox Music Group agreed in August 2007 to pay him $10,300 a month but that it has missed three payments and failed to give him a semiannual royalty accounting statement. “These breaches . . . have put Prodigy’s family in financial peril,” say documents filed last Monday (March 23) in Manhattan Supreme Court. (New York Post)

The Mobb Deep frontman recently made headlines after a collection of a letters revealed his thoughts on Rick Ross and Vibe magazine.

“Now it’s the slavery of our minds covertly,” P wrote. “There’s people out there who get the chills when they hear Rick Ross, like he’s something special. These are the kind of fools we’re dealing with…I was just reading Vibe Magazine’s ‘Best Rapper Alive 2008’ article…Vibe says 920,000 people voted for it. I would personally b*tch slap all 920,000 of these voters if given the opportunity. Who in the f*ck picked Crooked I, Flo Rida and Rich Boy? How did Vibe approve this? In the back of the Vibe, they have a section called ’20 Questions,’ they actually try to imply that The Game‘s album LAX is better than 50 Cent‘s Massacre and Curtis…Basically people, we have a gang of herbs in positions of power.” (Hip Hop Stan)

Serving a three and a half year jail bid, SOHH previously reached out to Mobb Deep’s Havoc to get an update on this partner’s condition.

“His health is good as far as I know,” Hav said. “He’s in good spirits. He wants to get the f*ck out but he’s feeling good. We just want to hurry up and get him home and get back to normal life.” (SOHH)

Prodigy pleaded guilty October 2007 to gun possession which led to his current incarceration.

Mobb Deep rapper Prodigy has been sentenced to three-and-a-half years behind bars after pleading guilty to a weapons charge dating back to 2006. Authorities say Prodigy was pulled over in downtown Manhattan after he was spotted driving in the opposite direction on a one-way street in an attempt to claim a parking spot. A search of the car turned up an unlicensed .22-caliber pistol. He will begin his sentence January 2008. (Hip Hop Galaxy)

Vox Music Group has yet to release a statement regarding Prodigy’s lawsuit.