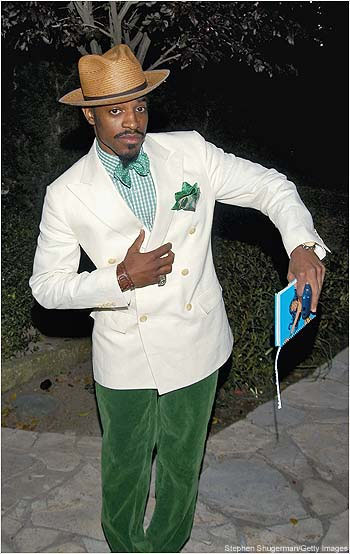 Revered Atlanta rapper Andre 3000 was arrested outside of Atlanta on Saturday (March 28), for driving his 2007 Porsche Carrera at speeds so excessive police called him “an accident waiting to happen.”

According to a report by local ABC-affiliate WSB-TV Monday afternoon (March 30), the Grammy Award winning rapper/actor was arrested by a member of the Henry County Police Department’s Highway Enforcement of Aggressive Traffic Team early Saturday morning.

Benjamin was arrested for the danger he posed to other drivers.

The arrest comes as State Representative Jim Cole is lobbying for a new Super Speeder Bill to be passed in the state of Georgia.The law would impose an additional $200 fine for any driver stopped for driving at more than 85 miles an hour on highways and four-lane roads. Georgia Governor Sonny Purdue has indicated his support of the bill, which he intends to sign into law before summer.

Representative Cole stated that he hopes Benjamin will lend his support to the cause.

“He might be willing to help us market it,” Cole told WSB-TV. The Outkast co-founder was released after posting an unspecified bond amount.

He is scheduled to appear in court to face charges associated with the incident on April 29. At press time, representatives for Andre 3000 could not be reached for comment.

On Sunday (March 29), Benjamin wrapped up a live revival of his award-winning cartoon “Class of 3000,” which made a comeback as a stage play earlier this month. The play, based on the short-live Cartoon Network Series’ pilot episode, “Life Without Music,” was presented for a month-long run as a partnership between Andre 3000 and the Alliance Theater in Atlanta.

According to Andre, who hopes to bring the play to schools around the country, he wanted to create an experience that would encourage kids to explore music beyond what is offered by the mainstream. “I wanted to make sure it wasn’t the teenybopper, kiddie sounds or stupid songs,” he told the Associated Press.

“I wanted to introduce them to different styles of music I was introduced to. From funk to jazz to calypso music, just to let them know there’s a base from what they are hearing now.”

Despite great critical acclaim and a 2007 Emmy Award for Individual Achievement in Animation, “Class of 3000” was cancelled in early 2008. The decision to bring the show to live came shortly there after, at the request of the Alliance Theater’s director Rosemary Newcott, who told the Associate Press it was a “no-brainer” because of Benjamin’s impact through the show.

“The whole spirit of this show is infused with him, with his sense of humor and his love for music,” she raved. “That’s a valuable trait that draws people in.”