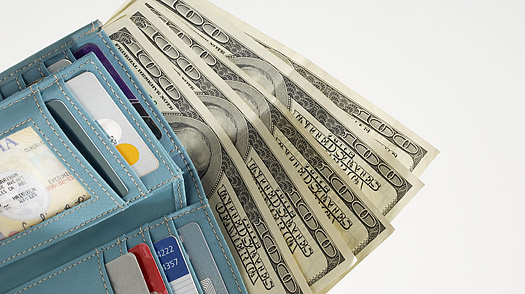 For shoppers in today’s economy, there’s just too much temptation out there. Sure, your pockets are tight. But there are clearance sales in every store, and deep discounts down every aisle. So how do you stop yourself from spending? Especially when you know that, during this awful downturn, you should be saving every last penny?

Just arm yourself with $100 bills.

According to a new study to be published in theJournal of Consumer Research, shoppers are less likely to spend their dough if they are carrying cash in large denominations. This so-called “denomination effect” can be a powerful predictor of consumer spending habits. Through a series of experiments, the study shows that if people have an equivalent amount of money, say $100, the folks with a Ben Franklin in their pockets might not part with it, while those carrying Andrew Jacksons and George Washingtons more easily give up that cash. (See the top 10 worst business deals of the past year)What’s driving the denomination effect? First off, some consumers see large bills as more sacrosanct than a bunch of chump change. “People tend to overvalue bigger bills,” says Joydeep Srivastava, a marketing professor at the University of Maryland’s Robert H. Smith School of Business and a co-author of the study. “There’s a psychological cost associated with spending a $100 bill that’s not there with spending smaller bills.” We tend to isolate the cash in our minds. Each $20 is a separate, less valuable entity than that single $100 bill. So it’s easier to part with five of those twenties than a single precious hundred in our pockets.

Further, consumers fear that once they break that large bill, they won’t be able to stop spending the rest. “Once that barrier is passed, it’s like a dam gets broken,” says Srivastava. “And we’ve found that when people decide to spend, they’ll spend more with the bigger bill than with the smaller bill.” Researchers have labeled this phenomenon the “what the hell” effect: I’ve broken the hundred, it’s gone from my wallet, what the hell, I may as well blow off the rest. So consumers, afraid that the “what the hell” effect will drain their wallets, hold on to those large denominations.

For example, in one experiment the researchers gave 89 undergraduate business-school students from Cal-Berkeley and the University of Maryland a dollar. They told the students they could keep the money or use it to buy candy. About half of the students were given a dollar bill, while another half were given four quarters. Only 26% of the students who got the bill spent the money, while 63% of the students given quarters bought some candy. However, once they decided to spend, the students with the paper made bigger purchases. (See Real Simple’s saving and budgeting tips.)

The “what the hell” effect even crosses the Pacific. The researchers ran a similar test in China that yielded comparable results. They gave 150 housewives 100 yuan that they could either save or use to buy soap, shampoo, bedding and pots and pans. Half the women received the 100 yuan in a single bill, while the other half got it in the form of a 50-yuan bill, two 20-yuan notes and a 10-yuan bill. Over 90% of the women who received the smaller bills spent the money. Meanwhile, just 80% of the women given a single note spent the cash. But among those who spent, the small-bill group spent an average of 56.76 yuan, while the large-bill group spent 67.67 yuan.

Since shoppers with bigger bills are less likely to make purchases, frugal consumers can carry hundreds as a form of self-control. From a recession-fighting perspective, however, self-control is Satan. The U.S. government is desperate for consumers to start spending again. So maybe the Obama Administration is approaching the economic stimulus the wrong way. Forget about tax cuts and grants to state governments. Just give the people a bunch of $1 bills.