“The Deltas are psychos…You have to be a certified psychopath to join the Delta Force…”, a US Army colonel from Fort Bragg once told me back in the 1980s. Now President Obama has elevated the most notorious of the psychopaths, General Stanley McChrystal, to head the US and NATO military command in Afghanistan. 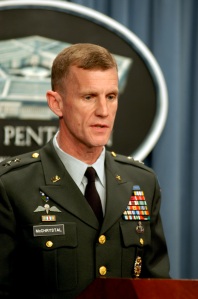 McChrystal’s rise to leadership is marked by his central role in directing special operations teams engaged in extrajudicial assassinations, systematic torture, bombing of civilian communities and search and destroy missions. He is the very embodiment of the brutality and gore that accompanies military-driven empire building. Between September 2003 and August 2008, McChrystal directed the Pentagon’s Joint Special Operations (JSO) Command which operates special teams in overseas assassinations.

The point of the ‘Special Operations’ teams (SOT) is that they do not distinguish between civilian and military oppositions, between activists and their sympathizers and the armed resistance.  The SOT specialize in establishing death squads and recruiting and training paramilitary forces to terrorize communities, neighborhoods and social movements opposing US client regimes. The SOT’s ‘counter-terrorism’ is terrorism in reverse, focusing on socio-political groups between US proxies and the armed resistance. McChrystal’s SOT targeted local and national insurgent leaders in Iraq, Afghanistan and Pakistan through commando raids and air strikes. During the last 5 years of the Bush-Cheney-Rumsfeld period the SOT were deeply implicated in the torture of political prisoners and suspects.

McChrystal was a special favorite of Rumsfeld and Cheney because he was in charge of the ‘direct action’ forces of the ‘Special Missions Units.  ‘Direct Action’ operative are the death-squads and torturers and their only engagement with the local population is to terrorize, and not to propagandize. They engage in ‘propaganda of the dead’, assassinating local leaders to ‘teach’ the locals to obey and submit to the occupation. Obama’s appointment of McChrystal as head reflects a grave new military escalation of his Afghanistan war in the face of the advance of the resistance throughout the country.

The deteriorating position of the US is manifest in the tightening circle around all the roads leading in and out of Afghanistan’s capital, Kabul as well as the expansion of Taliban control and influence throughout the Pakistan-Afghanistan border. Obama’s inability to recruit new NATO reinforcements means that the White House’s only chance to advance its military driven empire is to escalate the number of US troops and to increase the kill ratio among any and all suspected civilians in territories controlled by the Afghan armed resistance.

The White House and the Pentagon claim that the appointment of McChrystal was due to the ‘complexities’ of the situation on the ground and the need for a ‘change in strategy’. ‘Complexity’ is a euphemism for the increased mass opposition to the US, complicating traditional carpet ‘bombing and military sweep’ operations. The new strategy practiced by McChrystal involves large scale, long term ‘special operations’ to devastate and kill the local social networks and community leaders, which provide the support system for the armed resistance.

Obama’s decision to prevent the release of scores of photographs documenting the torture of prisoners by US troops and ‘interrogators’ (especially under command of the ‘Special Forces’), is directly related to his appointment of McChrystal whose ‘SOT’ forces were highly implicated in widespread torture in Iraq. Equally important, under McChrystal’s command the DELTA, SEAL and Special Operations Teams will have a bigger role in the new ‘counter-insurgency strategy’. Obama’s claim that the publication of these photographs will adversely affect the ‘troops’ has a particular meaning: The graphic exposure of McChrystal’s modus operendi for the past 5 years under President Bush will undermine his effectiveness in carrying out the same operations under Obama.

Obama’s decision to re-start the secret ‘military tribunals’ of foreign political prisoners, held at the Guantanamo prison camp, is not merely a replay of the Bush-Cheney policies, which Obama had condemned and vowed to eliminate during his presidential campaign, but part of his larger policy of militarization and coincides with his approval of the major secret police surveillance operations conducted against US citizens.

Putting McChrystal in charge of the expanded Afghanistan-Pakistan military operations means putting a notorious practitioner of military terrorism – the torture and assassination of opponents to US policy – at the center of US foreign policy. Obama’s quantitative and qualitative expansion of the US war in South Asia means massive numbers of refugees fleeing the destruction of their farms, homes and villages; tens of thousands of civilian deaths, and eradication of entire communities. All of this will be committed by the Obama Administraton in the quest to ‘empty the lake (displace entire populations) to catch the fish (armed insurgents and activists)’.

Obama’s restoration of all of the most notorious Bush Era policies and the appointment of Bush’s most brutal commander is based on his total embrace of the ideology of military-driven empire building. Once one believes (as Obama does) that US power and expansion are based on military conquests and counter-insurgency, all other ideological, diplomatic, moral and economic considerations will be subordinated to militarism. By focusing all resources on successful military conquest, scant attention is paid to the costs borne by the people targeted for conquest or to the US treasury and domestic American economy. This has been clear from the start: In the midst of a major recession/depression with millions of Americans losing their employment and homes, President Obama increased the military budget by 4% – taking it beyond $800 billion dollars.

Obama’s embrace of militarism is obvious from his decision to expand the Afghan war despite NATO’s refusal to commit any more combat troops. It is obvious in his appointment of the most hard-line and notorious Special Forces General from the Bush-Cheney era to head the military command in subduing Afghanistan and the frontier areas of Pakistan.

It is just as George Orwell described in Animal Farm: The Democratic Pigs are now pursuing the same brutal, military policies of their predecessors, the Republican Porkers, only now it is in the name of the people and peace.  Orwell might paraphrase the policy of President Barack Obama, as ‘Bigger and bloodier wars equal peace and justice’.