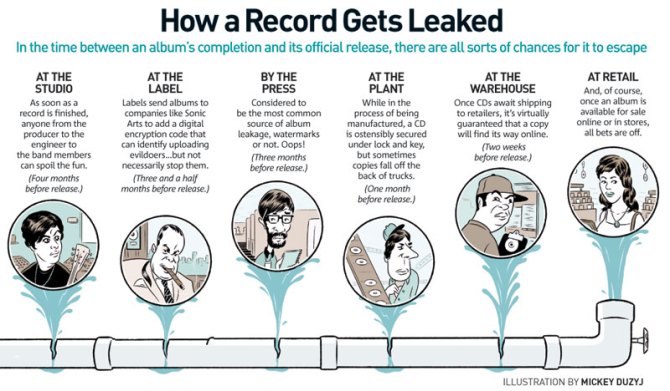 Just in case you were wondering, this is a summation of how songs spring a leak

At The Studio: As soon as a record is finished, anyone from the producer to the engineer to the band members can spoil the fun. (4 months before release)

At The Label: Labels send albums to companies like Sonic Arts to add a digital encryption code that can identify evildoers…but not necessarily stop them. (3 1/2 months before release)

By The Press: Considered to be the most common source of album leakage, watermarks or not. Oops! (3 months before release)

At The Plant: While in the process of being manufactured, a CD is ostensibly secured under lock and key, but sometimes copies fall off the back of trucks. (1 month before release)

At The Warehouse: Once CDs await shipping to retailers, it’s virtually guaranteed that a copy will find its way online. (2 weeks before release)

At Retail: And of course, once an album is for sale online and in stores, all bets are off.