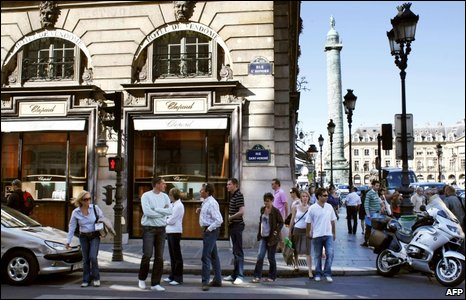 Jewellery worth more than 6m euros (£5m, $8m) has been stolen from an exclusive Paris store in broad daylight by a lone gunman, police sources say.

Dressed in a suit and fedora, the man entered Chopard on Place Vendome and reportedly made staff hand over 15 pieces of jewellery at gunpoint.

The mid-afternoon hold-up lasted two minutes, after which the robber, said to be in his 50s, calmly walked out.

Chopard jewellery is worn by stars at the Oscars and Cannes film festival.

Place Vendome is an elegant old square known for its luxury hotels, and is also home to numerous jewellery stores as well as the French justice ministry.

In December, armed robbers stole jewels worth at least 80m euros ($102m) from a store near the French capital’s famous Champs-Elysees avenue.

As many as four robbers, two disguised as women, raided the Harry Winston’s store and stole nearly all its valuables.

The Vendome robber struck just before 1500 (1300 GMT) on Saturday, at a time when, in good weather, the square is usually full of strollers.

“According to the first set of information we received, it was a man in his 50s, dressed in a chic costume and wearing a Borsalino [fedora] hat,” Olivier Lebon, a police union representative, told Reuters news agency.

“He came in like any other customer, pointed his gun at employees and asked for about 15 pieces.”

It was not immediately known if the robber had an accomplice waiting for him outside the store.

A sales assistant working in an adjacent jeweller’s store told AFP news agency she had heard and seen nothing. “We were working,” she added.

Late on Saturday afternoon, the store at No 1 Place Vendome stood closed behind iron shutters, an AFP correspondent reports.

The French capital was basking in sunshine on Saturday, with temperatures rising to a summery 23C, AFP reports.

At least some of the capital’s beau monde would have attending the French Open, one of the tennis world’s most prestigious events, at the city’s Roland Garros stadium.

Among Chopard’s commissions is the Golden Palm awarded at the Cannes festival.

Founded in 1860, the firm has branches in major cities across the world.