One of my all time favorites. This move was magical and still is though we now know how it was done. 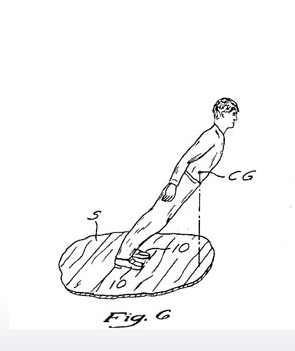 In a famous scene from Michael Jackson’s music video for “Smooth Criminal,” the pop singer and his troupe of dancers are seen leaning forward at a 45-degree angle. How did he do it?

Dvice.com reports that the singer and his dancers used wires and harnesses in the 1988 music video. But when Jackson performed the song live, he had the help of special shoes. The shoes were actually patented in 1993.

US Patent number 5255452 explains that the shoes contain anklets that imitate the rigidity of ski boots and also latch on to pegs that rise out of the floor, thereby allowing Jackson to defy gravity.

The patent states that the shoes are “a system for allowing a shoe wearer to lean forwardly beyond his center of gravity by virtue of wearing a specially designed pair of shoes which will engage with a hitch member movably projectable through a stage surface. The shoes have a specially designed heel slot which can be detachably engaged with the hitch member by simply sliding the shoe wearer’s foot forward, thereby engaging with the hitch member.”

Jackson may have come up with his own unique leaning move, but it appears he may have been heavily influenced by dance legend Fred Astaire. One YouTube user created a video that blends Jackson’s “Smooth Criminal” with scenes from Astaire’s 1953 film “The Band Wagon” that shows similarities between Jackson and Astaire’s dance moves.

One thought on “Shoes Key to Jackson’s Smooth Criminal Vid”