Very cute kid who will probably be bigger than his pops one day.The fanboys are up in arms about this casting but give the kid a chance he will probably hit this one out of the park. 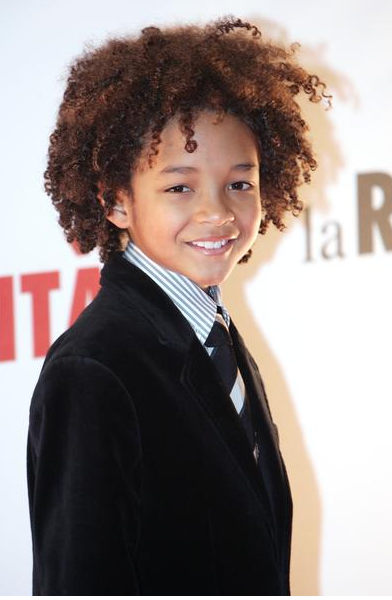 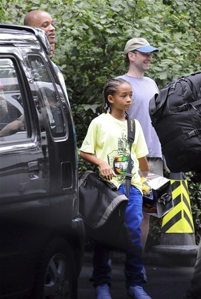 In this photo taken Wednesday, July 8, 2009, actor Will Smith, left, and his son Jaden Smith, front, are seen at the Beijing Film Studio in Beijing, China. Jackie Chan will play Mr. Miyagi to Jaden Smith's Daniel in a Hollywood-Chinese remake of the 1984 hit "The Karate Kid" that kicked off filming in the Chinese capital Beijing over the weekend, a movie company publicist said Monday, July 13, 2009. (AP Photo)

BEIJING — Jackie Chan will play the wise kung-fu master in a Hollywood-Chinese remake of the 1984 hit “The Karate Kid” that kicked off filming in the Chinese capital at the weekend, a movie company publicist said Monday.

In “The Karate Kid,” Pat Morita plays the iconic building handyman Mr. Miyagi who trains one of his young tenants, portrayed by Ralph Macchio, into an accomplished fighter.

“Kung Fu Kid” is being directed by Harald Zwart, who also directed “One Night at McCool’s” and “The Pink Panther 2,” Solon So, the chief executive of Chan’s company, JC Group, told the AP.

Will Smith _ one of the film’s producers _ Chan, Zwart and others symbolically removed a piece of red cloth covering a movie camera, after which Smith gave Chan a hug, according to video posted on Chinese news Web site Sina.com. His hair done in a huge Afro and wearing a bright red track jacket and blue pants, Jaden Smith stood and waved when he was introduced. His father ruffled his hair when he sat down.

Chan said on his Web site he also attended the younger Smith’s 11th birthday party last Wednesday, where he and Will Smith posed for pictures with young performers wearing red and yellow costumes with dragon patterns.

Ken Stovitz, one of Will Smith’s partners in the production company Overbrook Entertainment, said at the ceremony Saturday that “Kung Fu Kid” will be set in modern-day Beijing. China Film Group chairman Han Sanping said shooting will last three months.

Chan juggles careers in Hollywood and Chinese-language film. The veteran 55-year-old Hong Kong action star will be seen in the upcoming the Hollywood action comedy “The Spy Next Door,” about an undercover Chinese spy whose cover is blown, and the Chinese production, “Big Soldier,” about the friendship between two soldiers set in China’s ancient Qin dynasty.

Jaden Smith costarred with his father in the 2006 movie “The Pursuit of Happyness” and appeared in the 2008 Keanu Reeves sci-fi movie “The Day the Earth Stood Still.