How many wanna bet that she did not sign that last minute pre-nup? 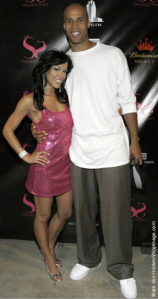 Former New Jersey Net star Richard Jefferson bailed on his stunning fiancée — pulling the plug on his posh Manhattan wedding at the 11th hour without even alerting some of the guests, The Post has learned.

The cold-footed forward’s decision to ditch onetime Net dancer Kesha Ni’Cole Nichols was so last-minute that some of his oblivious friends had already shown up last Saturday at the swank Mandarin Oriental in Columbus Circle for the $2 million wedding that never happened.

Jefferson — who was traded in June to the San Antonio Spurs — dumped Nichols just before the weekend, according to sources.

She immediately called her family and friends to say the ceremony was off.

But Jefferson waited much longer, his friends told The Post.

“He called about two hours before the wedding. It was nuts,” said one Jefferson pal.