Black dude who obviously loves him a whole lot of Mr. Seacrest.

Hit the jump to see what the guy who wants to spend the rest of his life in the arms of the handsomely paid host of American Idol and producer of The Kardashians. 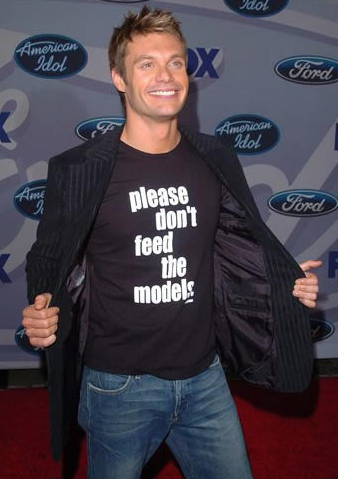 Debuting new music, hosting a radio show, manning the E! airwaves and outwitting an alleged stalker are all in a day’s work for Ryan Seacrest.

An armed man was caught outside Seacrest HQ on the E! campus just before 10 a.m. and was quickly handcuffed and detained by security guards before being handed off to Los Angeles police officers.

E! News has confirmed that the man was Chidi Uzomah, who was sentenced to 15 days in jail and three years’ probation after attacking a member of Seacrest’s security detail outside a charity event last month.

Uzomah, who was wielding a three-inch folding knife, never came close to Seacrest today. As he entered the E! lobby, security immediately recognized Uzomah from a photo that was circulated following that earlier incident. Guards confronted Uzomah and held him until LAPD arrived.

Officers have since removed Uzomah from the E! premises, which also houses Seacrest’s KIIS-FM radio studio, and have taken him in for questioning by the Threat Management Unit.

They didn’t, however, take in his car…

E! News has exclusively learned that Uzomah’s beat-up red Ford Thunderbird remains parked at the meters outside the building.

Among the items discovered in the vehicle: multiple maps of West Hollywood and Beverly Hills, a screwdriver, towels, clothes and a spare pair of shoes, water bottles, a receipt from Jack in the Box, Q-tips, rock crystals and a blue tarp.

Not that he needs our reminding, but nevertheless: Stay safe, Ryan!