How the mighty have fallen. Us magazine has finally released the photo of Jesse James posing as Adolf Hitler which was being shopped around to various tabloids. This seems to be the final nail in his career after being so popular and marrying one of Hollywood’s biggest stars. We are not buying it Jesse you are finished. More below: 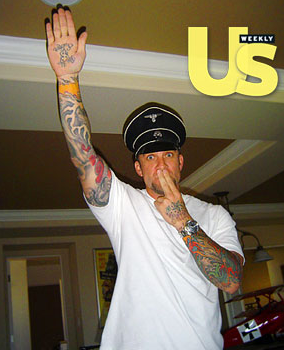 The disturbing photo is featured in the new Us Weekly (on newsstands now).

“He did it for shock value,” a source tells Us Weekly of the shot, taken in James’ home.

The photo comes out days after TMZ unearthed a shot of James’ alleged mistress, tattoo model Michelle McGee, wearing a swastika armband at a photo shoot.

One thought on “Jesse James is a Nazi, US Magazine Releases Picture of Him as Adolf Hitler”