After seeing these pictures have surface expect the hammer to come down immediately. Hit the jump for more pics and info: 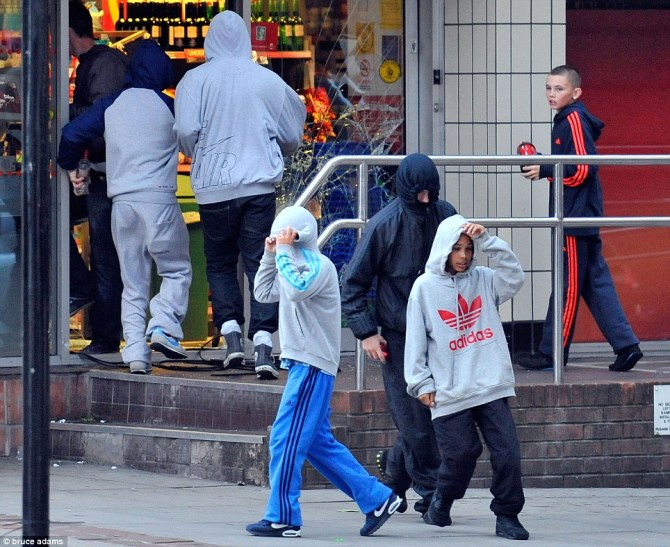 David Cameron today gave the go-ahead for police to use water cannons on rioters after children as young as nine looted stores and made off with bottles of wine and vodka in fresh violence that flared around the UK yesterday.

The children wore tracksuits and unlike hardened older thugs they innocently disregarded covering their faces as they ran through the shattered glass of supermarkets to fill their pockets with looted goods.

But today, the police were given the green light to use water cannons with 24 hours’ notice. The Prime Minister said that plans had been put in place to deal with the disorder using water cannons – making it the first time they would be used on the streets of mainland Britain.

The comments were seen as U-turn on what Home Secretary Theresa May said earlier this week when she ruled out the use of water cannons. The ‘softly softly’ approach has been shelved and police will finally be given the backing to come down hard on offenders.

‘Police are already authorised to use baton rounds and we agreed at Cobra that, while they are not currently needed, we now have in place contingency plans for water cannons to be available at 24 hours’ notice,’ Cameron said in a speech outside Downing Street this morning.