It is a shame that a few knuckleheads mar the Labor Day festivities every year by bringing out guns, to what is supposed to be a celebration of cultures from the Carribean. I was there and the weather was perfect, food delicious and tons of beautiful women in scantily clad outfits. Fellas leave the guns at home and come and have a good time and stop destroying the biggest parade of the year. 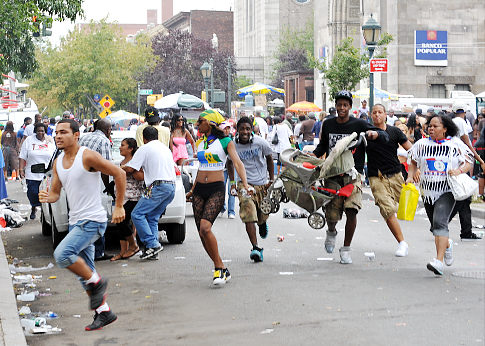 Parade-goers flee in terror after a gunman opened fire on a crowd on Utica Avenue. (Todd Maisel/News)

Two men were shot at Eastern Parkway near Rochester Ave. on the sidelines of the massive celebration about 2:30 p.m., police said.

One man was shot in the abdomen and the other in the lower back after they got into a scuffle with the shooter. Both were expected to survive, sources said.

The gunman fled into the panicked crowd.

About a dozen blocks west on Eastern Parkway, the parade’s main thoroughfare, near Rogers Ave., a man was shot in the leg about 5 p.m. and taken to Kings County Hospital, officials said.

“He pulled it out and fired off two shots,” parade-goer Pauline Mash, 29, said of the gunman. “The crowd just went wild running.”

Two cops were wounded in a gun battle Monday night, capping off a terrifying spate of shootings that left four people dead on Monday – one a bystander – and marred Brooklyn’s West Indian Day Parade.

The surge of violence wounded eight and put the number of people shot over the weekend around the city to at least 48, including two people who were killed Sunday night. It came the same day the Daily News reported that 24 people were shot in the 24-hour period beginning 6 a.m. Saturday.