Here is the story in full which has caused a shitstorm in the media about Colin Capernick’s tats and probably because he is black and definitely likes Hip Hop music. look for his cameo in a Lil Wayne video in 5,4,3…This is probably the empty suits in the NFL worst nightmare come true. 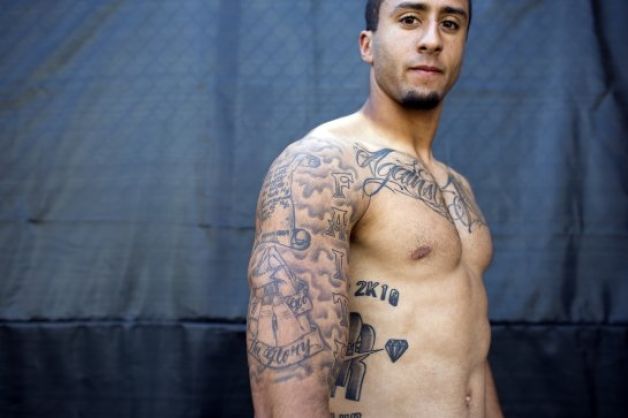 San Francisco’s Colin Kaepernick is going to be a big-time NFL quarterback. That must make the guys in San Quentin happy.

Approximately 98.7 percent of the inmates at California’s state prison have tattoos. I don’t know that as fact, but I’ve watched enough “Lockup” to know it’s close to accurate.

I’m also pretty sure less than 1.3 percent of NFL quarterbacks have tattoos. There’s a reason for that.

NFL quarterback is the ultimate position of influence and responsibility. He is the CEO of a high-profile organization, and you don’t want your CEO to look like he just got paroled. 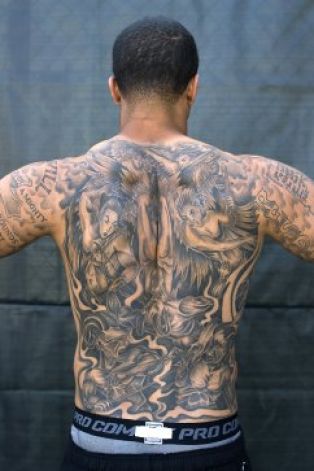 Now along comes Kaepernick. Since taking over for Alex Smith two games ago, he has convinced everybody in the Bay area that he’s the second coming of Steve Young.

Smith is coming back from a concussion, ushering in the attendant QB controversy. But he is looking like Wally Pipp and Kaepernick is Lou Gehrig. All I can do is look in the mirror and sigh.

Forgive me, but I suffer from tattoo-ism. I sport no ink, and I don’t want any. I know that attitude qualifies me for an AARP card, and I’ve tried to get with it.

I realize tattoos are ways to pay homage to your religion, children and motorcycle gang. I’m cool with LeBron James looking like an Etch A Sketch.

I still cringe when I go to the gym and see middle-aged women with barbed wire circling their biceps. They have bigger arms than I, so I never make fun. But I can’t shake the notion that a person’s body is a temple, and you don’t cover temples in graffiti.

For dinosaurs like me, NFL quarterbacks were our little Dutch boys. The original hero stuck his finger in the dyke to save Holland. Pro QBs were the last line of defense against the raging sea of ink. When our kids said they wanted a tattoo, we could always point to the Manning brothers.

My guess is Archie would have made Peyton throw an extra 1,000 passes before dinner if he’d come home with a tattoo. The old man knew QBs are different.

Did Sammy Baugh, Johnny Unitas, Doug Williams or Joe Montana have arms covered in ink? Do Tom Brady, Drew Brees or Aaron Rodgers? The world will end when Tim Tebow shows up a tattoo parlor.

It’s not just a white thing, I hope. When the Panthers interviewed Cam Newton, owner Jerry Richardson popped the question.