Another black man gets no justice after being being killed in police custody.

Prosecutors are dropping charges against the remaining officers facing trial in connection with Freddie Gray’s death.

Corey Hawkins and Jason Mitchell  who played Dr. Dre and Eazy-E respectively,in the smash hit Straight Outta Compton star alongside  Samuel L. Jackson in yet another reboot of King Kong. Coming from the producers of Godzilla, most people in the Youtube comments believe this is the set up movie for King Kong vs. Godzilla. Guess we will have to see if this is any good first. 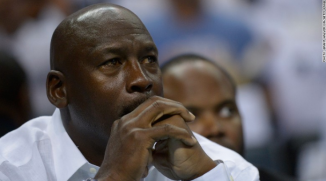 Too little, too late?

MJ speaks to the Undefeated about the spate of shootings of black men and police officers. His full statement below:

“As a proud American, a father who lost his own dad in a senseless act of violence, and a black man, I have been deeply troubled by the deaths of African-Americans at the hands of law enforcement and angered by the cowardly and hateful targeting and killing of police officers. I grieve with the families who have lost loved ones, as I know their pain all too well.

END_OF_DOCUMENT_TOKEN_TO_BE_REPLACED

Lesson of the day: Do not get out of car at wildlife park.

A woman was killed by a tiger over the weekend after jumping out of a car in a Beijing animal park to try to save her daughter from a tiger attack, local government officials said.

At least one tiger mauled the women on Saturday at Badaling Wildlife World in a section that allows people to drive their own vehicles through a Siberian tiger enclosure, the Yanqing County government said in a written statement.

Surveillance video that circulated widely online showed a woman exit a car, then walk to the other side of the vehicle, where she was attacked a few seconds later by a tiger. As the animal dragged her away, her husband and mother jumped out in an attempt to rescue her.

YG brings along Macklemore and G-Eazy in Pt.2 of “Fuck Donald Trump”

The New York Police Department officer who choked Eric Garner to death during a confrontation over the sale of individual cigarettes is still on the force two years after Garner’s death. His daughter, Erica Garner, tells RT America’s Anya Parampil that she is still speaking with the US Department of Justice and members of Congress, trying to seek justice for her father’s killing. She also talks about her efforts to bridge the gap between police and the black community.

Rakim ruined Hip Hop according to Daylyt, and though this sounds crazy he makes some valid points.

This went right under the radar.

An NYPD lieutenant is the latest active-duty cop to say that the department still uses arrest and summons quotas, despite a 2010 state ban on the practice and a denial from the city’s top cop.
The lieutenant, who asked not to be identified for fear of retaliation, told the I-Team that the 10 active-duty cops in a federal class-action lawsuit against the NYPD who came forward this week “were telling the truth” about the illegal practice.

“There is still a quota system within the NYPD,” the lieutenant said.

END_OF_DOCUMENT_TOKEN_TO_BE_REPLACED

This is just another traumatizing murder of a black man by a police murder caught on tape. All the under the guise of President Obama.

Boosie love him or hate him speaks straight from the heart. In the case his gives his thoughts on gay culture being pushed on the population through the media to children.

Some network needs to give this kid and his brothers a tv show.

Despite some reports Troy has not yet been granted bail yet.

Today Troy Ave was in court with his attorneys Scott Leemon and John Stella they presented a bail appeal to the district attorney in which they have to review financial documents given to them, John Stella says ‘these things take time’ and expect to bail the Brooklyn rapper as soon as next week. We asked Stella if the individuals that got into scuffle with Troy will be brought to court and most likely they won’t…especially without any witnesses