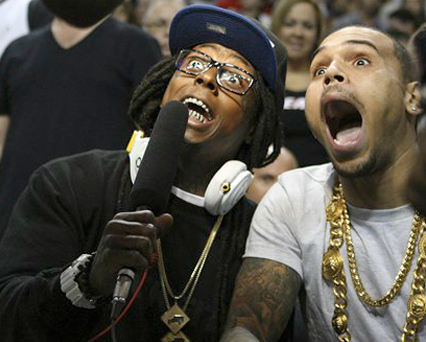 But investigators believe he did more than just party with the hip-hop stars.

Federal authorities on Thursday revealed they are investigating a $15,000 wire transfer last year from Brown to the bank account of Garcia, who boasted that the money was for drugs and the popular cough syrup-and-soda known as “lean.” And Garcia, when he was first arrested last October, confessed that he sold Lil Wayne “a lot of narcotics,” a federal agent testified on Thursday in Garcia’s trial for drug dealing.

The revelation came on the third day of testimony in the trial for Garcia, the 26-year-old who agents believe sold drugs to buy a fleet of luxury cars, a cache of firearms and scores of high-end sneakers, bags and hats.

Garcia’s lawyers, Gustavo Lage and Percy Martinez, have suggested that Garcia was not a drug dealer but was only showboating to build a social-media following, using the guns “as props” while dealing with an addiction to the drink made from promethazine with codeine.

They’ve also suggested that agents were using Garcia to notch a “feather in the cap” by going after bigger names — specifically Brown and Lil Wayne.

Harrison Garcia, who is on trial in Miami federal court for alleged drug dealing, pictured here with rapper Chris Brown. An agent revealed Thursday that Brown paid $15,000 to Garcia, allegedly for drugs. Instagram

That the rappers might use drugs would be no surprise. Like more than a few rappers over the years, they’ve used their music to celebrate weed and the soda brew also known as “purple drank” or “sizzurp.” Lil Wayne even suffered seizures after apparently drinking massive amounts of the cocktail, the celebrity gossip website TMZ reported last year.

But until Thursday, the federal government had not revealed any probe into their drug activity. Efforts to reach representatives of the rappers was not successful on Thursday.

Garcia’s Instagram page portrayed a close association with Lil Wayne — Garcia appeared holding stacks of cash in the music video for the song “Cut it Freestyle.” And he was pictured with Brown — who has had his share of legal troubles over the year — and his crew known as OHB, or Original Hood Bosses.

Garcia once posted a photo showing himself on an airport runway accompanying Brown in Albania for a show. Another photo shown in court showed Garcia on Brown’s private plane en route to Spain, Agent Selent testified Thursday.

Jurors on Thursday got to see the extravagances of that rap lifestyle.

Prosecutors and agents carefully presented dozens of shoes, belts and luxury-brand sneakers, all in the original boxes, all seized at one of Garcia’s homes. That includes a $476.80 Salvatore Ferragamo brown leather belt, $699 Air Jordan retro sneakers and a $1,355 leopard-print Christian Louboutin sneakers, the tips decked in sequins.

“Some might say it’s a crime buying such expensive sneakers,” defense lawyer Martinez asked HSI Agent Geoffrey Goodwin. “But it’s not a crime, is it?”

Goodwin also showed jurors a mound of garish gold jewelry, including Garcia’s pendant of a foam cup with a purple liquid and several teeth grills that are “somewhat bejeweled, so to speak.”

Then jurors got to see evidence of Lil Wayne — whose real name is Dwayne Michael Carter — and Brown’s involvement in the form of text messages seized from Garcia’s phones.

The messages appeared to show Garcia directing his “do-boy” to deliver drugs to Lil Wayne and his crew. “I’ll shoot u some trees,” one message read, a reference to marijuana. “It’s for Wayne,” Garcia allegedly responded via text.

The text message about Brown was more explicit. Garcia sent a bragging text message to a woman of a screen shot of the $15,000 bank deposit from “Christopher Brown” into his account.

The woman responded: “What that for LOL”

On cross-examination, defense attorney Lage grilled Agent Selent about the screen shot, suggesting the feds were really targeting the rappers.

“You were very interested in the $15,000 wire transfer from Chris Brown,” Lage asked.

Lage wanted to know more details about their review of banks records.

“Open investigation,” the agent said. “Not allowed to talk about it.”