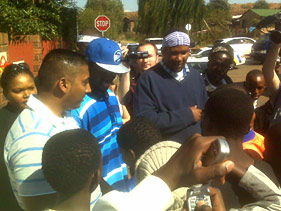 Wow , finally got some 50 Cent news that does not have anything to with Fat Joe or Young Buck.
It seems that 50 has made a trek to Africa and has met with living legend Nelson Mandela and plans to explore “platinum mine to see the grueling conditions that some work under for the bling that stars rock to look pretty”.

It is great to see 50 over there because the more connections to the motherland we have the better off we will be. MTV has the lowdow:

This isn’t JUST a tour. 50 is here to see and learn about the region and continent in a way that perhaps he didn’t appreciate the last time he was here, in 2004. This morning, for example, we rushed to Hector Pieterson Memorial museum in Soweto to meet up with 50 and Nelson Mandela’s grandson, who was giving 50 a lesson on Apartheid and its effect on South Africa. Mandela’s grandson is the spitting image of a young Nelson, and has a lot of his grandfather’s austere diplomacy — except he’s young enough to know who 50 and Jay-Z are. After the tour, guided by Mandela’s grandson, 50 gave out 20 dollar bills to the local kids before his car got mobbed and his manager made him speed away.