I think I will stay with the shorter one.

Verizon’s BlackBerry Storm is getting a little kick in its pricing courtesy of an Amazon rebate-free rebate. The deal here is that the infamous touchscreen BlackBerry is now $99.99 on a two-year stint, no rebate paperwork, no mailing things anywhere, just shell out cash, get phone, call people. Verizon has a buy one get one free thing going on right now, so if you’re looking for two Storms for the price of one — and that one is still $199 — you can head on over to see them. Everybody happy now?

Oh, so this is where the dough went, cuz the streets were bone dry this holiday season

Jeff Bezos, the founder and CEO of Amazon (AMZN) is the Internet’s great escape artist. His company has been in trouble countless times only to emerge better off. He was beaten on by the stock market for low margins and high shipping costs. He bought profits up to show that he could, if he wanted to, produce better earnings.

When investors were concerned that all he had was on online book retailer, he increased his product offerings to include a range of items from consumer electronics to jewelry.

Bezos has been endlessly inventive. He brought the Kindle electronic book reader out earlier this year. It has been, by almost every measure, a success. Even Oprah likes it.

Bezos figured that he had excess computing and e-commerce capacity, so he allows other companies to pay to use a part of his IT infrastructure.

This holiday season has turned out to be like the wreck of the ore ship the Edmund Fitzgerald. One moment it was there, and the next moment it had sunk all the way to the bottom. Every retailer has been taken down, with the possible exception of Wal-Mart (WMT).

To the amazement of Wall St., Amazon today said it had “its best holiday ever”.

In the firm’s statement it said, “Amazon announced the 2008 holiday season finished as its best ever, with over 6.3 million items ordered worldwide on the peak day, Dec. 15, which is a record-breaking 72.9 items per second.”

The company cataloged the reasons for it success. It posted impressive sales for software, GPS devices, coffee, watches, and CDs.

In the final analysis, Amazon probably did so well because new products such as the Kindle build upon the consumers’ impression that the online store firm is endlessly inventive. Amazon has done what many of its Web 1.0 rivals have not been able to do. It has set the bar so high that no one else can clear it.

Remember Sony and Microsoft? No? Well, neither does the average Amazon customer.

According to a release sent out by the online retail giant Friday, the Nintendo Wii and all its accessories dominated video game sales during the holiday shopping rush and not one mention was made of Sony’s Playstation 3 or Microsoft’s Xbox 360.

“Nintendo Wii dominated the top sellers in video games and hardware, including the Wii console, the Wii remote controller and the Wii nunchuk controller,” the release reports.

What about all its competitors? Have they somehow entered the realm of irrelevance?

I’m starting to wonder if they have.

A quick glance at console sales over the past year tells you everything you need to know about the video game hardware business. With 43.75 million units sold, the Wii easily dominates the market, which is also home to 26.49 million Xbox 360 units and 18.82 million Playstation 3 consoles. END_OF_DOCUMENT_TOKEN_TO_BE_REPLACED

Let the war for our ears begin! The fact that these guys will be linking up with Myspace could definetly a formidable foe for the guys over at ITunes. This will definitely benefit the consumers at the end of the day. 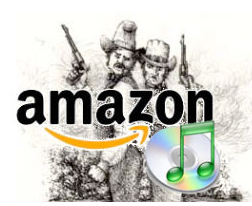 NEW YORK (Fortune) — It was easy to scoff two years ago when word leaked out that Amazon was launching its own digital music service. The Seattle-based online retailer wasn’t just mulling an iTunes-like download store – it was supposedly drawing up plans for a branded iPod-like device.

But Amazon CEO Jeff Bezos had a much better plan for a digital music offering than his naysayers realized. Ten months after its debut, Amazon (AMZN, Fortune 500) has overtaken competitors like Wal-Mart (WMT, Fortune 500) and RealNetworks’ (RNWK) Rhapsody to become the second biggest online store after iTunes, according to market research firm NPD. Now two music industry sources tell Fortune that Amazon is talking to MySpace (NWS, Fortune 500) about becoming the social networking giant’s download store partner when it rolls out its highly anticipated joint venture with Universal, Warner Music and SonyBMG in September.

Here is the latest from Andressa who remains extremely popular on this blog and everywhere else.

Hip Hop has been fascinated with the beauty of Brazil ever since Pharrell and Snoop christened the South American oasis the home of all things beautiful via their video clip for “Beautiful.” With that in mind STREET KNOWLEDGE presents one of the finer exports to make her way from the jungles of Brazil. Our prediction: Andressa Soares will become the face of beauty not only for Brazil’s thriving tourist industry but the first rapper to snag an appearance by this Brazilian goddess will see that video virally hit a million in hours. Playboy got the first crack at it with this exclusive no-holds barred photo and video shoot they did with the Brazilian bombshell. Remember, you heard it here first: Andressa Soares got next. They only make ’em like that in the Amazon, baby!
END_OF_DOCUMENT_TOKEN_TO_BE_REPLACED

A British man is being accused of causing a flu epidemic in a remote Amazonian tribe that he illegally infiltrated. On behalf of the Discovery Channel’s World Lost Tribe series, Matt Currington sought out the Matsigenka people who were tucked away in the Cumerjali area of south-eastern Peru. Now he is being blamed for four deaths that are being attributed to the flu virus linked to Currington. A similar epidemic is reportedly responsible for the wholesale slaughter of indigenous American tribes once they came into contact with Columbus and his forebearers back in the day.

A representative of indigenous tribes said: “They were warned not to go upstream, but were unhappy with the tribe in Yomybato – the village they were permitted to visit – as the Indians appeared too westernised. So, in searching for a more stereotypical tribe, they came into contact with a vulnerable community. CLICK HERE for full details on this story.

Peeped this over at UrbanBlogger.