Just when you thought you had heard the last of this song, popular culture refuses to let it die. Here is a preview of it on the new Rockband playlist.

What happens when you put together a bunch of former Youtube stars who are looking to stretch out their final minutes of fame? The Chronicles of Rick Roll featuring Antoine Dodson, and a bunch of other guys I guess who had some type of popular youtube video.

Just when I thought that I had seen it all with the Antoine Dodson phenomenon now this to close out the year. According to Gawker this choir group is from certified a-hole and deceased Jerry Falwell’s University.

I have never seen a phenomenon like this cat right here. I don’t whether to take this serious or what but they are turning this cat into a cottage industry. How long till they hit a million dollars worth of Antoine related merchandise?

Just when you thought this ‘Antoine Dodson’ phenomenon could not get any scarier, we have witchcraft practicing Christian O’ Donnell using his unlikely hit ‘Bed Intruder’ in her campaign against Chris Coons (yeah I know the name says it all).

Obviously her campaign strategists are big fans of Antoine’s and he actually appeared at the BET HIP HOP AWARDS that aired last night. This guy won’t quit. Hit the jump to see the weirdest addition to the awards.

END_OF_DOCUMENT_TOKEN_TO_BE_REPLACED

Just when you thought it was over!

This story just refuses to die. Can you believe he has a doll? Things are really getting scary when this dude is the hottest thing on the internet. I have added the hilarious auto-tune video of what has been aptly named the ‘Bed Intruder’ song. If you don’t know about this phenomenon you definitely been living under a rock. Google is your best friend when it comes to this dude and let’s hope his 15 minutes are up soon, but knowing better they may just be starting. 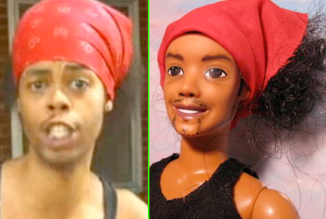