I guess he wanted to taking Crippin’ to a new level.

Couldn’t he just get the blue-ray and call it a day? 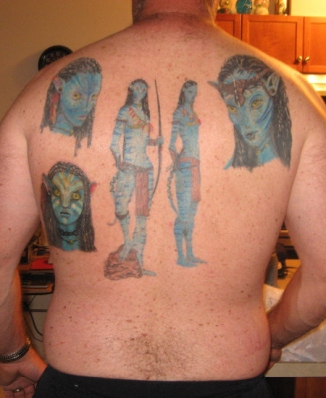 If you know me then you know I am a big fan of Avatar. It was the greatest piece of film making I have ever seen and I respect James Cameron’s story telling ability. I have said many times this movie has literally taken over the world. I have never seen such a reaction to a movie in my life. Here is another video that just confirms my beliefs. Is this ‘Life Imitating Art or Art Imitating Life?’

The village of Bilin reenacted James Cameron’s new film Avatar during todays weekly demonstration. Five Palestinian, Israeli and international activists were painted blue, with pointy ears and tales, resembling the Avatar characters. Like Palestinians, the Avatars fight imperialism, although the colonizers have different origins. The Avatars presence in Bilin today symbolizes the united resistance to imperialism of all kinds.

END_OF_DOCUMENT_TOKEN_TO_BE_REPLACED

Okay it is official everyone on the planet has seen Avatar.

more about “ Amazing Inside Look At The M…“, posted with vodpod

This is absolutely amazing and weird all at the same time. Wanna see more people turning them selves into Na’vi go right here.

We have now reached the age of Pandora. Expect to see millions dressed as the Na’vi for every Halloween for the rest of eternity.

KOB: According to an arrest warrant, [Dante] Aikins was upset about the blunder, telling his friends, “I can’t believe it, I dropped my pistol.” Albuquerque Public Safety Chief Darren White: “It appears Aikins tried act as though it was a firecracker because he knew what he had done.”

Did you guys see Avatar? If not, I highly recommend you take yourself to the nearest movie theater for three hours and see this masterpiece. Props to James Cameron for creating a movie that is beyond just a bunch of CGI and things blowing up (sorry Michael Bay). Check out the cast below as they go from human to 9 ft. Aliens. (Scott who did a great job compiling these pics, made a mistake with Tsu’tey who is played by Laz Alonso and not .).

While the critics are raving about Avatar(which I can’t wait to see), I decided to drop these images of Denzel’s new flick The Book of Eli which is due next year and looks absolutely dope. For even more stills click here

END_OF_DOCUMENT_TOKEN_TO_BE_REPLACED

Brand new trailer of the most expensive movie ever made Avatar.

Yes the rich wanna be avatars.

– The super wealthy will have such access to high levels of health care, biotechnology and robotics that they could develop into their own species of being, argues a Silicon Valley  futurist. The rich will be able to grow their own organs and manipulate genetics for superior abilities and freedom from disability and disease, according to Paul Saffo, who teaches at Stanford University. “The simple fact is that first we invent our technologies and then we turn around and use those technologies to reinvent ourselves,” Saffo tells the Times of London.

“I sometimes wonder if the very rich can live, on average, 20 years longer than the poor. That’s 20 more years of earning and saving,” he adds. “Think about wealth and power and the advantages that you pass on to your children.”

I did not know what to expect with this movie, but it looks absolutely riveting and the next level in movie making. Can’t wait!!

Can’t wait till James Cameron releases some of this movie to the public so we can get a feel of what all the fuss is about.

LOS ANGELES — In an old airplane hangar near the beach here,James Cameron has been working feverishly to complete a movie that may:

(b) Alter your brain

For certain expectant movie fans, the answer might as well be all of the above.

Eight months before its scheduled release on Dec. 18, Mr. Cameron’s “Avatar,” a science-fiction thriller filmed with his own specially devised 3-D technology, is stirring up a kind of anticipation that until now had been reserved for, say, the Rapture.

That might foretell a hit on the order of Mr. Cameron’s“Titanic,” with $1.8 billion in worldwide ticket sales.

Or it might just be a giant headache for 20th Century Fox, which is backing “Avatar” and will have to spend much of the year managing expectations for a film whose technological wizardry is presumed by more than a few to promise an experiential leap for audiences comparable to that of “The Jazz Singer,” the arrival of Technicolor or an Obama campaign rally. END_OF_DOCUMENT_TOKEN_TO_BE_REPLACED

LOS ANGELES — The imminent full-bore return to 3-D filmmaking, upon which the movie industry is placing many of its hopes, is in danger of becoming Hollywood’s latest flub.

Some of the mightiest forces in film — Jeffrey Katzenberg, James Cameron, John Lasseter — think the multiplex masses will soon demand that all movies be shown in newly available digital 3-D. Mr. Katzenberg, in particular, has pushed the format, trotting the globe to herald the technology as a transformative moment for cinema akin to the introduction of sound.

His bandwagon has plenty of passengers, at least in Hollywood. The Walt Disney Company alone has 15 three-dimensional movies in its pipeline. Twentieth Century Fox is betting an estimated $200 million on “Avatar,” a 3-D space adventure directed by Mr. Cameron and set for December release, his first nondocumentary film since 1997’s “Titanic,” still the biggest moneymaker in movie history, without counting inflation. All told, the movie factory has over 30 3-D pictures on the way.

But analysts are starting to warn that all of that product could find itself sitting on a loading dock with no place to go. Studios, thrilled by 3-D’s dual promises of higher profits and artistic advancement, have aggressively embraced the technology without waiting for movie theaters to get on board. And without those expensive upgrades to projection equipment at the multiplex, mass market 3-D releases are not tenable.

“It’s starting to look like there will be a lot of disappointed producers unable to realize the upside of these 3-D investments,” said Harold L. Vogel, a media analyst and the author of “Entertainment Industry Economics.” Filming in 3-D adds about $15 million to production costs, he said, but can send profit soaring because of premium ticket pricing.

Only about 1,300 of North America’s 40,000 or so movie screens support digital 3-D. (Imax adds 250.) Overseas, where films now generate up to 70 percent of their theatrical revenue, only a few hundred theaters can support the technology. It costs about $100,000 for each full upgrade. END_OF_DOCUMENT_TOKEN_TO_BE_REPLACED