I guess he could not handle all the pressure of his father’s criminal activity, wonder if he felt he was next to go down? 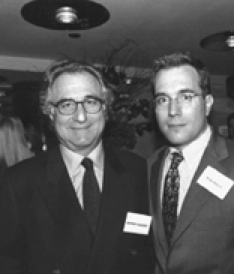 NEW YORK (AP) — One of Bernard Madoff’s sons was found dead Saturday of an apparent suicide, according to a law enforcement official.

Mark Madoff, 46, was found hanged in his apartment in Manhattan’s SoHo section, according to the official. A family member notified police around 7:30 a.m.

END_OF_DOCUMENT_TOKEN_TO_BE_REPLACED

Did you think someone who stole 20 billion dollars and is staring down a 150 year prison sentence would be sorry? Sorry to disappoint you guys but this guy is a hero behind the prison walls. 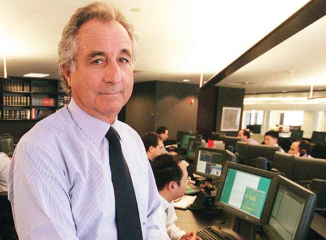 He was past apologizing. In prison, he crafted his own version of events. From MCC, Madoff explained the trap he was in. “People just kept throwing money at me,” Madoff related to a prison consultant who advised him on how to endure prison life.

END_OF_DOCUMENT_TOKEN_TO_BE_REPLACED

Well it seems that Bernie got his head handed to him in jail. The inmates obviously don’t like people who steal.

Sources told WTVD, the ABC affiliate in Raleigh Durham, North Carolina, that the convicted Ponzi schemer had facial fractures, broken ribs and a collapsed lung and was discharged from Duke two days ago. Officials at the Butner federal prison, where Madoff is serving a 150-year sentence, would not confirm the report.

This is beyond creative. May I dare to say genius? (By the way the fineprint on the pic says the artist name is Chen Wenling from the art exhibit ‘What you see might not be real‘) 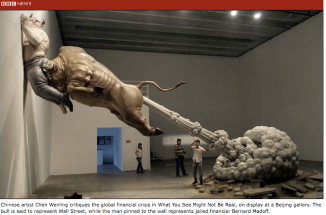 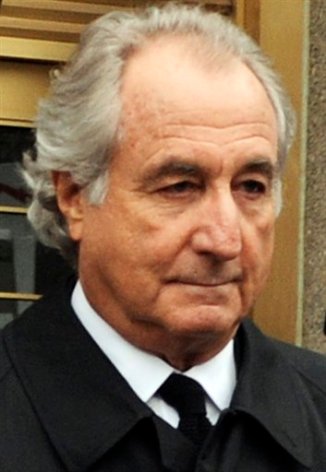 Bernie Madoff, ringleader of the history-making $50 billion Ponzi scheme, was sentenced to 150 years in prison. While Madoff’s lawyer pushed for a 12 years, some victims find solace in the 71-year old receiving the maximum sentence as they fight to recover some of their money. 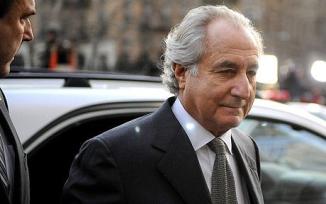 About $12 billion was pulled out of accounts at Bernard L. Madoff’s firm in 2008, according to several people briefed on an analysis of Mr. Madoff’s business records.

About $6 billion, or half, was taken out in just the three months before the financier was arrested in December and charged with operating an extensive Ponzi scheme, these people said.

Those figures offer a bit of hope for Mr. Madoff’s thousands of defrauded customers. Under federal law, the trustee overseeing the Madoff bankruptcy can sue to retrieve that money from the investors who withdrew it.

Indeed, the trustee, Irving H. Picard of Baker & Hostetler, filed two lawsuits on Tuesday seeking the return of a total of $6.1 billion, which he estimated had been withdrawn over the last decade.

END_OF_DOCUMENT_TOKEN_TO_BE_REPLACED

Jet-setting financier Bernard Madoff relocated Thursday to Manhattan digs a bit more spartan and cramped than he enjoyed while fleecing his oblivious clients.

Inside the Metropolitan Correctional Center, typically home to terrorists, gangsters and drug dealers, the high-rolling Ponzi scheme mastermind is one of 750 inmates.

His sprawling East Side duplex is just a memory, replaced by a 7-1/2-by-8-foot cell. After 45 years of waking up with wife Ruth, Madoff may share his room with another inmate.

Instead of a leisurely weekend brunch, the 70-year-old Madoff gets a 6 a.m. wake-up call with breakfast served 30 minutes later. END_OF_DOCUMENT_TOKEN_TO_BE_REPLACED

What better way to inaugurate the one-year anniversary of Heath Ledger’s death, culiminating with his Oscar win last night than with a cover dedicated to the real Joker of Gotham, the financial magician Bernie Madoff.  Say hello to the bad guy.

BOSTON – The wife of disgraced money manager Bernard Madoff withdrew more than $15 million from a firm co-owned by her husband — including $10 million on the day their children turned her husband over to authorities for overseeing an alleged $50 billion Ponzi scheme, the top securities regulator in Massachusetts said Wednesday. 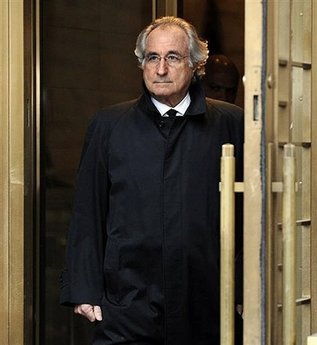 Secretary of State William Galvin said Ruth Madoff, 67, withdrew $5.5 million on Nov. 25 and $10 million on Dec. 10 — the day before Bernard Madoff was arrested — from Cohmad Securities Corp., a New York firm co-owned by her husband.

The secretary cited wire transfer records produced by Cohmad as proof of the withdrawals. They came as Madoffs’ scheme was unraveling as investors filed $7 billion worth of redemption requests.

They also appeared to follow what authorities consider a disturbing trend on the part of the Madoffs to hide money that could be used to reimburse burned investors.

Prosecutors have already said investigators found 100 signed checks worth $173 million that Madoff was ready to send out to his closest family and friends at the time of his arrest in December. Two weeks later, during the Christmas holidays, Madoff sent more than $1 million in jewelry and heirlooms to family and friends.

“We’re not accusing her of anything wrong,” Galvin spokesman Brian McNiff said of Ruth Madoff. “It’s just one of the things that came out in the response, such as it was, from Cohmad” to a subpoena from Massachusetts officials. “Now, what someone in New York or the feds may think of it may be entirely different.”

A telephone number listed to Ruth Madoff in Palm Beach, Fla., rang busy and a number in New York had been disconnected. A Cohmad spokeswoman in New York said the company had no comment. Ira Sorkin, a lawyer for Bernard Madoff, said he had no comment on the withdrawals. END_OF_DOCUMENT_TOKEN_TO_BE_REPLACED

THREE days after the world learned that $50 billion may have disappeared in Bernie Madoff’s Ponzi scheme, The Times led its front page of Dec. 14 with the revelation of another $50 billion rip-off. This time the vanished loot belonged to American taxpayers. That was our collective contribution to the $117 billion spent (as of mid-2008) on Iraq reconstruction — a sinkhole of corruption, cronyism, incompetence and outright theft that epitomized Bush management at home and abroad.

The source for this news was a near-final draft of an as-yet-unpublished 513-page federal history of this nation-building fiasco. The document was assembled by the Office of the Special Inspector General for Iraq Reconstruction — led by a Bush appointee, no less. It pinpoints, among other transgressions, a governmental Ponzi scheme concocted to bamboozle Americans into believing they were accruing steady dividends on their investment in a “new” Iraq.

The report quotes no less an authority than Colin Powell on how the scam worked. Back in 2003, Powell said, the Defense Department just “kept inventing numbers of Iraqi security forces — the number would jump 20,000 a week! ‘We now have 80,000, we now have 100,000, we now have 120,000.’ ” Those of us who questioned these astonishing numbers were dismissed as fools, much like those who begged in vain to get the Securities and Exchange Commission to challenge Madoff’s math.

What’s most remarkable about the Times article, however, is how little stir it caused. When, in 1971, The Times got its hands on the Pentagon Papers, the internal federal history of the Vietnam disaster, the revelations caused a national uproar. But after eight years of battering by Bush, the nation has been rendered half-catatonic. The Iraq Pentagon Papers sank with barely a trace.

After all, next to big-ticket administration horrors like Abu Ghraib, Guantánamo and the politicized hiring and firing at Alberto Gonzales’s Justice Department, the wreckage of Iraq reconstruction is what Ralph Kramden of “The Honeymooners” would dismiss as “a mere bag of shells.” The $50 billion also pales next to other sums that remain unaccounted for in the Bush era, from the $345 billion in lost tax revenue due to unpoliced offshore corporate tax havens to the far-from-transparent disposition of some $350 billion in Wall Street bailout money. In the old Pat Moynihan phrase, the Bush years have “defined deviancy down” in terms of how low a standard of ethical behavior we now tolerate as the norm from public officials. END_OF_DOCUMENT_TOKEN_TO_BE_REPLACED

Trust me alot of people wanna do much more than push this dude. He has just been summoned to the courthouse to discuss his bail conditions. Yes people someone who stole 50 billion dollars is on bail, while men are shot in cold blood by police while face down on the floor.SMH.

Saw this coming a couple of days ago.  Guess you wasn’t really ballin’ unless you was banking with Bernie.

The wealthy are always competing for status, and often in the strangest ways. The compete to show they possess the right opinions about race relations, sexual equality and the environment, of course. They eagerly join museum boards and charities focused on politically popular diseases. Being the member of the right club and going to the right schools helps, although not as much as it once did.

And now the wealthy have a new status symbol: getting ripped off by Bernie Madoff. Because Madoff is said to have only accepted an exclusive group of wealthy investors, saying you got ripped off by Madoff is a subtle way of saying that you’ve got big money. From those who spend their summers in Nantucket to those spending evenings at the Yale Club, Bernie Madoff has become the new name to drop.

“We’ll only be out in Nantucket for two weeks rather than the whole month,” a Nantucket regular recently told a friend. “We lost money in the Madoff thing.”

It is especially useful to those who lost money in the huge market downturn this year or found that their real estate investments were under water. Those losses can be a bit embarassing, almost an admission of failure and of commonness. Anyone can lose money in the stock, bond or real estate market…and almost everyone has. But to lose money to Madoff, well, that takes something special.

We suggest you try this out. Next time someone asks you to do something you aren’t sure you can afford, simply use the now fashionable Madoff Decline.

ROYAL PALM BEACH, Fla. (AP) – Pawnbroker Levi Touger tells reporters wanting to see the Lamborghini a Bernie Madoff victim hawked for quick cash that they needn’t bother stopping by. He doesn’t have it.

And, by the way, it was a Ferrari.

Touger’s Royal Pawn & Jewelry has made loans to some of the well-heeled Palm Beach investors caught in Madoff’s alleged $50 billion scam, turning his business into a bit of a media sensation as television crews inquire about filming the big-ticket booty. He says reports have overstated the items people were pawning, but not the income bracket of some of his more recent clients.

But you won’t find Italian sports cars and yachts in the parking lot of Royal Pawn.

First, he couldn’t afford the insurance to keep stuff like that lying around. Second, he’s not a car dealer.

But he acknowledges that the financial meltdown has resulted in more people pawning off their belongings, which serve as collateral for the 60-day loans that Touger provides, with interest of course. END_OF_DOCUMENT_TOKEN_TO_BE_REPLACED