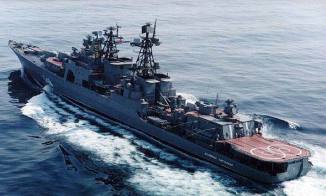 A group of Russian warships will from December 19-23 visit the Communist island of Cuba, a long-time adversary of the United States and Moscow’s ally in the Cold War, the Russian navy said on Monday.

“This will be the first visit to Cuba by Russian warships since the Soviet era,” the Russian naval headquarters said in a statement.

The destroyer Admiral Chabanenko and two other ships will visit Havana in what the navy described as a “significant practical step towards strengthening and developing ties between the two states’ navies.”

Russian ships have been touring countries close to US waters in what is seen as a riposte to Washington’s own moves in Russia’s Soviet-era sphere of influence, including US naval deployments in the Black Sea.

The Russian moves in Central and Latin America follow heightened tensions over this summer’s Russian military onslaught in Georgia, a close US ally in the Caucasus.

The navy also announced the completion of a visit to Nicaragua, during which it delivered aid to the Central American country led by leftist President Daniel Ortega.

Ortega is due to visit Moscow this week. END_OF_DOCUMENT_TOKEN_TO_BE_REPLACED

Hello can you hear me now? Raul Castro, the other Castro Brother has just lifted cellphone restrictions on the island of Cuba. Now Cubans can enjoy a priviledge that was once reserved for government elite; something so simple as talking on a cellphone. On a paltry state salary of $20 it may be necessary for Cubans to recieve outside support if they want those shiny popular gadgets like the iPhone or a Sidekick though.