Common and Diesel have partnered to create Diesel Presents…Only The Brave, a unique, one-of-a-kind video series following the lives and back stories of artists who represent this very definition of bravery. Taking fans from Los Angeles to Detroit, Harlem to Atlanta, rappers Nipsey Hussle, Big Sean, Vado, and Donnis bring the camera lens into their lives and cast light on the personal stories, challenges, and people that have made them the men they are today.

In this first video, Common introduces Nipsey Hussle and we get a sneak peek into life of the LA rapper.

Don’t know if this is a good idea because these counterfeit goods may cause crime with people fighting and hurting each other in order to resell this stuff.

About $10 million worth of knockoff designer goods is set to be donated to needy Haiti earthquake victims.

The fake duds “from” companies such as True Religion, Rocawear, Ralph Lauren, Diesel, and Ed Hardy will be shipped to Haiti after having their labels removed, per legal requirement.

Counterfeit goods are normally destroyed but an exception was made in this case.

The clothes and other items were netted in raids over the past two years.

Yeah, according to Cam, Crime Pays but hard work pays out as well (in residuals at that!).  Common has reached his apex as a rapper, is entering his plateau as an actor and these days it seems he is definitely the pitchman of choice for corporations looking to integrate with the Hip Hop dollar.  While some think he is on the cusp of over saturation, I for one beg to differ.  I remember the dedication he put into his craft and those checks are finally pouring in.  Congrats.

Sacha Baron Cohen is preparing to shock America with his latest film, which is said to contain a black model called Jesus wearing a loincloth and a crown of thorns.

The comedian, who has been sued by several people who featured in his film Borat, will be ready for similar reactions after the release of the big-screen debut of his character Bruno. 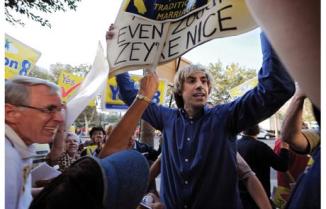 The title character, a gay Austrian fashion journalist, is already well known for storming runways at designers’ shows and aiming to embarrass industry figures in interviews. Clips of his work have become cult favourites on YouTube.

And it is thought that the film version will see Bruno in more outrageous form.

As well as the Jesus character, it is rumoured that Bruno and his boyfriend, Diesel, adopt an orphaned African baby boy called David and parade the child around fashion shows. It is thought the joke is aimed at Madonna, who adopted a Malawian baby called David Banda. END_OF_DOCUMENT_TOKEN_TO_BE_REPLACED

Diesel, known for treading the fine line in advertising, is back with probably their most raunchy attempt to capture the attention of the consumer with this “porn-themed” video campaign that is sure to break all kind of viral records for its devilish cleverness.