Cha-ching. The new get rich scheme is to obviously get Donald Sterling on the phone and record him and sell it to tabloid websites for a fee. This time its Radar Online who gets the scoop on how Donald Sterling feels after his racist comments were blasted worldwide. When will this fool learn to shut up?

RadarOnline.com has acquired a secret audio recording that reveals Sterling’s true reaction to the scandal for the very first time.

Alternately defiant and heartbroken, Sterling bares his true nature like never before in the shocking tapes, unapologetically insisting he is “not a racist” and will not back down from his position as Clippers owner — despite the public outcry over his vile comments.

“You think I’m a racist?” Sterling angrily asks a long-time friend in the recorded phone conversation. “You think I have anything in the world but love for everybody? You don’t think that! You know I’m not a racist!”

NBA Hall of Famer and former longtime Clippers executive Elgin Baylor alleges in a civil lawsuit filed Wednesday in Los Angeles that team owner Donald Sterling has embraced a “vision of a Southern plantation-type structure” for his NBA franchise, accusing him of decades-long racist behavior. 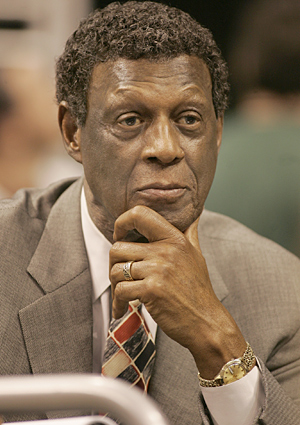 Baylor worked for the Clippers for 22 years. The complaint against Sterling and others, which was filed in Los Angeles Superior Court and obtained by The Times, presented Baylor’s version of an eroding relationship between Baylor and Sterling. Baylor contends, among other things, that the Clippers owner had “a pervasive and ongoing racist attitude as expressed to then-NBA player Danny Manning during contract negotiations.”

Asked about the nature of the allegations, Baylor’s lawyer Carl Douglas said in a telephone interview that “everything in the lawsuit is factual. . . . It would not be in Mr. Baylor’s best interest to disclose our trial strategy.”

There is a news conference scheduled for this morning at Douglas’ office in Beverly Hills.

Also named in the lawsuit was the team, the NBA and Clippers President Andy Roeser. Clippers officials said at their game against the Knicks on Wednesday they had not been served with the lawsuit.

“Not having seen the complaint, I cannot comment on Elgin’s specific allegations,” said Robert H. Platt, Clippers general counsel and partner at the law firm Manatt, Phelps & Phillips. “However, I can categorically state that the Clippers always treated Elgin fairly throughout his long tenure with the team. Prior to his decision to leave the team last October, Elgin never raised any claims of unfair treatment. END_OF_DOCUMENT_TOKEN_TO_BE_REPLACED