This ain’t just for LA this is for black people worldwide.

Skipp Townsend ( http://www.2ndcall.org ) visits Washington D.C. for the Justice Or Else! Million Man March 20th Anniversary and the message he took back to the streets of South Los Angeles was that “Black-on-Black” violence can be cured by putting down the guns and stop the hating on your own brothers.

Did he ever think that maybe the family of the victim would not like their loved one dead body splashed all over Twitter without their permission? Could you imagine if a cop was murdered and someone tweeted a similar photo there would be serious outrage. 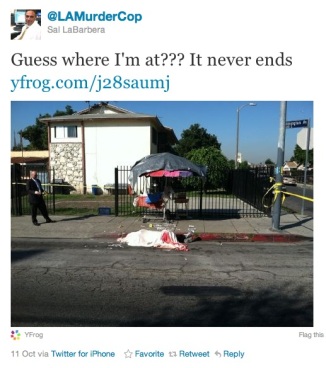 According to City News Service, 32-year-old Oscar Arevalo was shot dead that day on the sidewalk, in the 10600 block of Wilmington Avenue, around 9 a.m. Police have since announced that they believe two gang-affiliated suspects walked up to him, delivered the fatal bullets and ran away. They’re still on the loose.

END_OF_DOCUMENT_TOKEN_TO_BE_REPLACED

I do not even know what to say to this story. We have serious problems in our communities and another life is lost and we do nothing.

Theresa Lumpkin said she had been recently thinking of sending her son away to a safer neighborhood, fearful of the violence that’s pervading her area.

Now, like so many other mothers who’ve experienced the pain of losing a child to gun violence, she’ll bury her son.

END_OF_DOCUMENT_TOKEN_TO_BE_REPLACED

First single off of his album ‘100 Percent Authentic’ dropping in April.

(disclosure: video directed by creator of this blog Majesty)

Youth Violence is everywhere.  Regardless of race or sexual orientation, bullying is on the rise and needs to be addressed.  This is more serious than an old-school fight at recess.

DEERFIELD BEACH, Fla. — Three juveniles are in custody in connection with an attack on a 15-year-old boy who was deliberately set on fire near a Deerfield Beach apartment complex pool, the Broward Sheriff’s Office said.

Deputies were called to the Lime Tree apartments in reference to a teen who suffered a burn injury at about 3:15 p.m. Monday.When deputies and firefighters arrived, they found the victim, Michael Brewer, sitting in a lawn chair near the pool. The teen had been burned extensively above the waist, and he said that he was splashed with a flammable liquid and then set on fire.

The bloodshed continues with no answer in sight.

(funny he can stand next to an American icon like Willie Nelson and no “gang” concerns are ever mentioned but Snoop is catching flack as of lately about police fears for safety due to his “affiliations“).

Representatives for The 2nd Annual Monterey Music Summit have revealed that the concert has been postponed until at least October, because of heightened security concerns, due to an appearance by rapper Snoop Dogg.

The Monterey Music Summit was scheduled for May 30 – June 1 at the Laguna Seca Recreation area, but was canceled after The Monterey County Board of Supervisors demanded heightened security at the eco-friendly concert, which also featured Ky-Mani Marley, Talking Back Sunday, Crystal Method, Ozomatli and others.

At issue is a performance by Snoop Dogg, an admitted gang member and California native. In May, The Board reached an agreement with the Joe Fletcher Presents Inc., organizer of the Monterey Music Summit.
END_OF_DOCUMENT_TOKEN_TO_BE_REPLACED 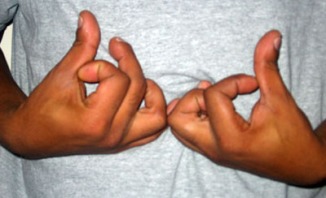 Realated Post: Chicago Gangs Give City Deadly Weekend..32 Shot, 2 Stabbed, 6 Dead
The community of Chicago and the police department are pulling out all the stops to prevent another bloody weekend amidst gang related shootings and murders.

Though they feel they can quiet things down a bit, a recent multiple shooting has them worried about a strong retaliation from local Gangster Disciples. Editors note : If anyone from Chicago can write in and give us some knowledge as to the situation we welcome your contribution: [Send your coverage here]

Police planned to increase patrols and put SWAT officers and specialized units on the streets over the weekend, a show of force aimed at deterring violence like the three dozen shootings that left nine people dead last weekend.

On Friday, Mayor Richard Daley took the unusual step of calling together more than two dozen officials from the police department, schools, social service agencies and religious groups for a City Hall summit on the violence. Afterward, he said it was just the start of a continuing dialogue about how to combat violent crime.

In a continuation of a story we reported on Monday, the bodies of five murder victims was discovered on Wednesday (4/23) adding on the spate of violence that saw 36 shootings over the weekend and nine confirmed deaths. Authorities expect gang violence to be at root of the weekend crime spree. All five victims, in their 20’s were found in the same residence, which was ransacked upon entry by a woman who discovered the bodies. The three men and two women were believed to have known each other.

This is very serious,” Thomas Byrne, Chief of Detectives said at a news conference near the two-story house. “There’s five victims. There’s five families right now that are grieving over this.”

This trend is connected to a more devastating statistic. This is the latest in a string of violence that has claimed the lives of over 20 public school students within the last six months, all victims of gun violence.

Editor’s Note: Senator Barack Obama should take this opportunity to exert leadership at this junction, after all the streets of Chicago fall under his legislative jurisdiction with him being the Senator of Illinois.
These are the very streets in fact where he cut his political teeth. The argument about gun control has to be made and after his spat with residents of Pennsylvania over his “bitter” remarks about their reliance on guns and religions he should make the distinction that guns have a dual history in this country.

Young “black” men and women are playing the role of hunted animals in these streets, devoid of any interference from God, Church, the Pope, Bush, there are no referees in this war on these city streets but something must be done. This is in his backyard and he’s been mute. They say all politics is local and if he’s going to be the agent of change he has got to call for some things to change back home before his message is adopted abroad.

Chicago gang violence seems to be bubbling out of control and this weekend proved to be no different. Multiple shootings and murders marked the “Windy City” known for having a serious gang problem for decades. Though no specifics about particular gangs involvement has surfaced
authorities have pegged the violence to be come from gang related activities. Story below:

CHICAGO (CBS) ― A violent and deadly weekend continues in Chicago. At least 12 people have been shot, two of them killed, since Saturday morning. Two others were stabbed in a home invasion. This comes after at least 20 people were shot, four of them killed, from Friday night through early Saturday.

A 28-year-old man was shot and killed at an auto body repair shop on the Southwest Side Saturday morning. Raul Lemus was shot in the stomach at 2520 W. 59th St. at about 11:20 a.m.

In another case, a suspect toting an AK-47 has been charged with murder and three counts of attempted murder after allegedly killing a man and shooting at police. Bennie Teague, 39, was denied bond in the case Sunday afternoon.

It’s amazing no one was hurt during the shootout between police and Teague, who was firing an assault rifle. Police say the gunman opened fire on them Friday night at 110th and South Union. They tracked him down after he allegedly shot and killed 34-year-old Marcus Hendricks inside a plumbing business a few blocks away.
END_OF_DOCUMENT_TOKEN_TO_BE_REPLACED