Tourists in the Galilee region of Israel were left shocked when they filmed a horse trying to gallop over a car. 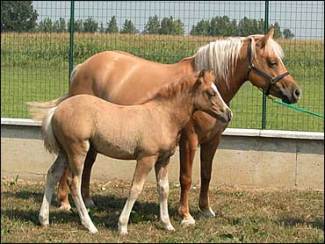 In our never ending quest to bring you the developing news on cloning technology scientists in Italy claimed to have successfully created a second generation cloned horse. The parent horse, Prometea named after the Greek god Prometheus was originally conceived through artificial insemination. Its offspring is named Pegasus after the mythical flying horse is reportedly a healthy foal.

Speaking from his research institute at Cremona he said: “The foal is called Pegasus. He was born over a month ago and is growing well. “Prometea is also healthy and is showing no difficulties.” Pegasus was born on March 17 naturally and with no problems after being conceived by artificial insemination, a common practice among horsebreeders…Pegasus shows that cloned animals can grow normally and reproduce in a natural fashion”. Prometea’s own birth was extraordinary not only because it was the first time a horse had been cloned but also because it was the first time a mammal had given birth to its own clone and exact DNA copy.”

They are expecting a second birth to a cloned stallion name Pieraz. The scientists who have also successfully created cloned pigs and cattles have been excommunicated by the Catholic Church for tinkling with “God’s design.”