It seems that the Pope is hopping mad about this crucified frog. Whatever. In my humble opinion the Pope should be more concerned about the heinous acts of violence going on in Darfur ,Iraq,China and hundreds of places across the planet. Where is Sinead O’ Connor when you need her?

Read the story Below: 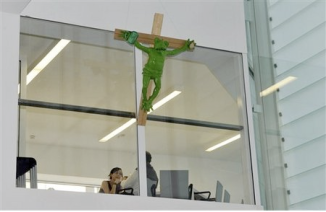 In this photo taken May 24, 2008 a view of a green frog nailed to a cross outside an office, during a protest inside the "Museion" museum in Bolzano , northern Italy. Museum officials said Thursday Aug. 28, 2008 the sculpture that has angered Pope Benedict XVI and local officials will continue to be on display. The board of the foundation of the "Museion", voted to keep the work by the late German artist Martin Kippenberger, the museum said in a statement. Earlier in August the pope had written a letter to Franz Pahl, the president of the Trentino-Alto Adige region that includes Bolzano, denouncing the sculpture. "(It) has offended the religious feelings of many people who consider the cross a symbol of God's love and of our redemption," (AP Photo/Othmar Seehauser)